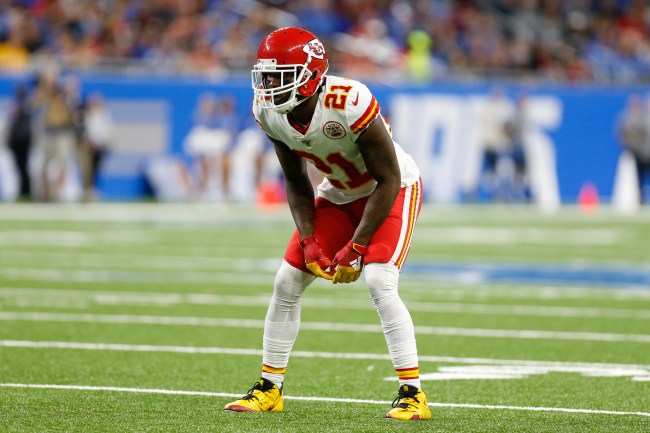 Earlier this week it was revealed Bashaud Breeland, a cornerback for the Super Bowl champion Kansas City Chiefs, was arrested and charged on five different charges in South Carolina: resisting arrest, the transport of alcohol in motor vehicle with a broken seal, open container of beer or wine in motor vehicle, possession of 28 grams or less of marijuana or 10 grams of hash, and driving without a license.

#Chiefs CB Bashaud Breeland was arrested Tuesday afternoon in South Carolina, per @postandcourier. Breeland is facing multiple charges including resisting arrest, having alcohol in a motor vehicle with the seal broken, marijuana possession, and driving without a license.

TMZ has obtained a cell phone video of Breeland’s arrest and it’s pretty terrifying. In the video, Breeland could be seen resisting arrest and tried to get back in his car when the arresting officer pulled out his gun.

Breeland was detained at around 11 AM at a South Carolina gas station after a York County Sheriff’s Office deputy says he saw the K.C. Chiefs player and 2 other men smoking weed.

The officer claims when he stopped Breeland for questioning … the 28-year-old became combative — and in new footage we obtained from the incident, you can see how the confrontation escalated in a hurry.

In the video, the officer attempted repeatedly to place the Chiefs cornerback in handcuffs … but Breeland consistently refused.

At one point in the vid, you can see the cop pulled a taser on the 5’11”, 195-pound defensive back … ordering him to stop resisting.

Breeland, though, ignored the officers orders … and when he wriggled away from the cop and got into his car — things took a frightening turn.

The officer pulled his gun and put it inches from Breeland’s face …Eventually, Breeland got out of the car, got on the ground and ultimately relented to the officer placing him in cuffs.

After the arrest Breeland claimed two men threw something in his car before the police approached him in a now-deleted tweet.

“Lot of people wanna speculate On my situation and don’t know the facts,”. “I really was at a gas pump got approach by two guys police pulled up they throw something my car as police pulled up which the cop saw and I was the one detained wit charges that really shouldn’t be charged … I’m not fighting to clear a name I don’t care wat people think I know the truth innocent until proven guilty.”