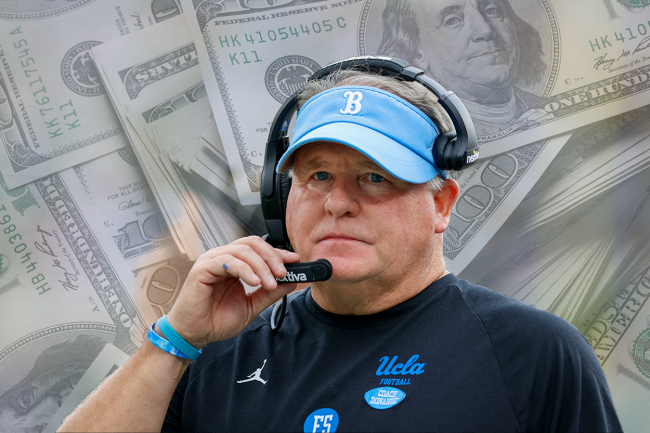 Chip Kelly is about to make a lot of money. Whether it be at UCLA or Oregon, the 58-year-old head coach is soon to cash in.

Earlier this week, former Ducks head coach Mario Cristobal left for the same position at Miami. That leaves an opening in Eugene, and Kelly’s name is very much in the mix.

Although the administration has reportedly considered some truly insane ideas, all signs point toward Oregon making a strong push to bring back their former head coach.

Kelly, who has been with the Bruins since 2018, enters the final year of his contract next season. As a result, his buyout drops from $9 million to ZERO on January 15th.

That makes things super interesting. It also sets Kelly up to either get paid by signing an extension with his current school, or get paid by another suitor. He is going to make a lot of money either way.

The fascinating variable of Oregon’s courtship of Chip Kelly is that his buyout drops from $9 million to zero after Jan. 15. He’s also entering the last year of his UCLA contract. Those potential pressures indicate some action is imminent — either an extension or an exit.

Oregon is currently without a head coach and has no reason to rush. A new hire would not coach the Ducks in their upcoming bowl game on Dec. 29, the early signing period begins this coming Wednesday so a new hire would be of little help on the recruiting trail in the immediate future, and National Signing Day is not until February 2, 2022.

Thus, waiting until the 15th to hire Kelly would still allot him more than two weeks to recruit for Oregon. He could go in and sure-up the loose ends and maybe flip some players from UCLA to Oregon in the process.

Waiting to bring back their guy would not hinder the program at all. Regardless of who the hire ends up being, it would be a transition year anyway.

So why not hold out for another month and save $9 million? If Kelly is the guy, which it sounds like he is as of right now, his current contract situation makes things very easy for Oregon.