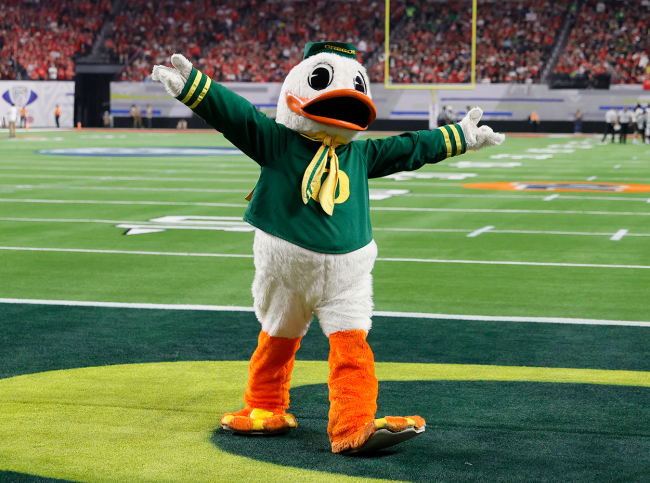 With an opening at head coach, the Ducks have apparently considering everything — literally every option — to replace Cristobal. They reportedly asked permission to interview UCLA head coach Chip Kelly with the idea of potentially having him return to Oregon.

Kelly, who served as head coach in Eugene from 2009 to 2012 and won three Pac-12 Championships before leaving for the same role with the Philadelphia Eagles. Since then, he coached one year with the 49ers and now the Bruins.

It gets even more wild.

While that idea might sounds crazy in itself, Oregon did not stop there. A new report has surfaced that is either certifiably insane or simply not true.

According to Oregonian columnist John Canzano, the Ducks have considered hiring not just Kelly, but a co-head coach alongside him. And if that isn’t nutty enough, Canazano says that those on the inside believe ithey can poach the co-head coach away from another Pac-12 program.

For those keeping track at home, Oregon is considering hiring Chip Kelly away from UCLA, as well as hiring another Pac-12 coach away from his current program and having the two of them serve as co-head coaches. Uhhhhhhhhh, WHAT?!

Canzano reported that the other name in mind is current California-Berkeley head coach Justin Wilcox. He would coach alongside Kelly.

Don’t blame you for thinking about a Justin Wilcox-Chip Kelly co-head coach tandem.

It has been bantered about internally at Oregon but I don’t think it works.

Blue-collar Wilcox paired w Kelly… feels like Yellowstone meets Succession. I think Wilcox would have to be DC, IMHO

This is absolutely bananaland. Not only has it literally never been done in the history of modern football, but there is a slim chance that another program has even considered such an idea.

Was someone throwing this out for a laugh? Did someone hear it in passing and immediately send his/her “report” to Canzano? Is it simply not true?

Or is Oregon actually out of its mind?

There is simply no in between. Either it’s a joke and Canzano got got, Canzano made it up, or the leadership in Eugene is mad as a hatter.

And, on top of that, talk about the audacity from Oregon! To believe that the school can hire away not one but two in-conference head coaches is certainly holding the program in high regard.