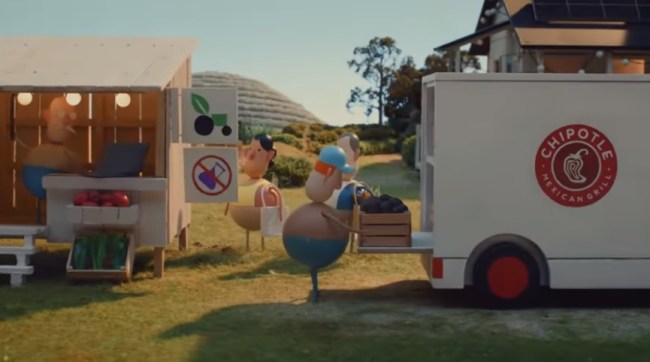 Chipotle got people talking during the NFL’s Thanksgiving Day game.

Late in the second quarter of the Cowboys-Raiders game, Chipotle ran a two-and-a-half-minute commercial featuring a cartoon farmer seemingly dying in the snow while a cover version of Coldplay’s “Fix You” plays in the background that left people scratching their heads.

Only true chipotle fans can see this pic.twitter.com/rKmWjaPEQd

NFL fans weren’t exactly sure what to make of the commercial.

All that for a Chipotle commercial.

Did we really just see a @ChipotleTweets commercial where an elderly cartoon farmer died shoveling snow? Kinda makes me want a burrito. #chipotle

A sad heartstring pulling ad about family and quite literally a death fakeout all literally leading to "Eat Chipotle" is one of the funniest things I've seen in a minute… pic.twitter.com/UJ0UAdERPh

Let's see how that Chipotle commercial went over with people pic.twitter.com/8ewpITrtmf