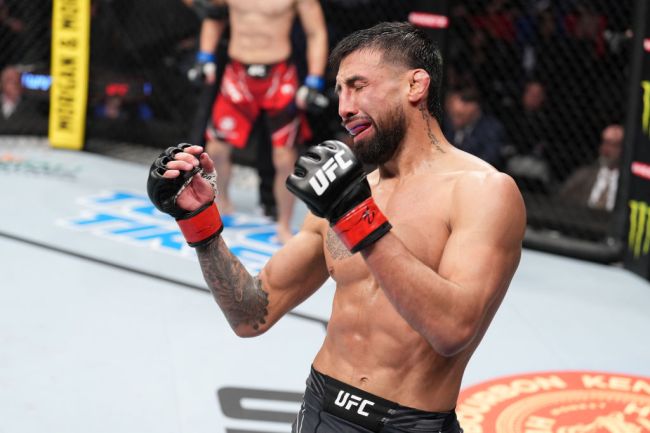 The undercard of today’s UFC Fight Night card has been filled with competitive action from the start. That action got ratcheted up a level in the card’s fifth fight of the night.

Two fighters who had only suffered one loss each in their UFC careers met as Chris Gutierrez took on Danaa Batgerel at 135 pounds. While the two have had similar levels of success in the UFC, they have gotten there in very different ways.

Gutierrez has been a methodical striker who consistently outworks opponents and chops away at their legs with heavy leg kicks. Batgerel possesses absolute dynamite in his hands and has secured all 3 of his UFC wins by 1st round finish.

Early in the fight, that was how things were playing out. Gutierrez tried to pick away from the outside and keep Batgerel at range while Batgerel chased him down and swung heavy shots at his head. Danaa got the better of it in the first round thanks to a late takedown and some heavy shots from the top as the round was expiring.

It was more of the same early in round 2 until Gutierrez flipped the script. Danaa was trying to close the distance when Gutierrez spun and landed a huge spinning backfist that put Batgerel down. All he needed was a few follow-up shots and the fight was his.

Gutierrez sees a big rise in his stock after this highlight reel win and could be within a win of getting a crack at a top 15 opponent.

Batgerel probably doesn’t fall very far after the loss and remains a prospect to watch thanks to his impressive finishing ability.

Whatever comes next, one thing is for sure. Chris Gutierrez is going to collect an extra $50000 for a Performance of the Night bonus tonight.