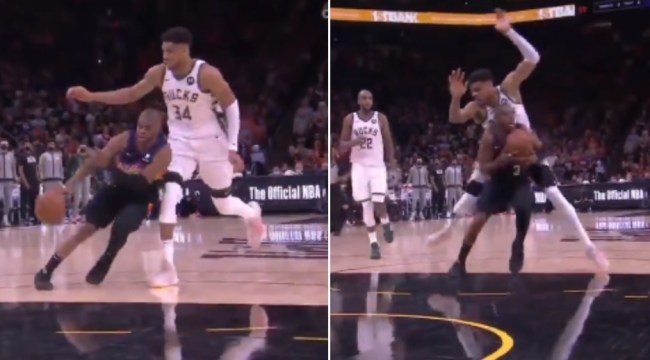 Chris Paul has a reputation of being a player who will do anything to win a game but on Tuesday night some fans thought he went a bit too far with his antics.

Ahead of game 1 of the NBA Finals, it was unclear if Bucks star Giannis Antetokounmpo would play after he suffered what many thought was a serious-looking kneee injury during the Eastern Conference finals.

Antetokounmpo ended up playing in game 1 against the Suns and actually put up some solid numbers in his first game back since getting injured.

“I thought I would be out for a year,” Antetokounmpo said.

Instead, Antetokounmpo was out for only a week, and was able to return for Game 1 of the NBA Finals on Tuesday night against the Phoenix Suns. And while Antetokounmpo’s Milwaukee Bucks lost to the Suns 118-105 to start the series, all the superstar forward could focus on was that he was able to be on the court and playing alongside his teammates.

Antetokounmpo suffered a hyperextended left knee on that awkward and ugly-looking fall a week ago in Atlanta against the Hawks. But on Tuesday night, he said the knee felt stable and free of pain as he finished with 20 points, 17 rebounds, four assists, a steal and two blocks in 35 minutes, going 6-for-11 from the field and 7-for-12 from the free throw line.

During the game, Bucks fans had a bit of a scare when Chris Paul fell near Giannis’ knees while drawing a foul which some felt was a dirty move by the veteran Suns guard.

How many games before Chris Paul do that stop right in front of somebody in transition to draw a foul shit right into Giannis knee?? https://t.co/hOGrAZt3lq

This man truly is a villain on the court . https://t.co/RgCzSDDe1W

Other fans argued that CP3 did nothing wrong and just slipped on the court.

He literally slipped but ok https://t.co/p62vnGpMRq

NBA Twitter is the worst because it’s so obvious CP3 slipped here but they gotta get their ratios and dumbass takes across https://t.co/5ccS7eIBg5

I’m sure this isn’t going to be the first or last time CP3 gets accused of being a dirty player by Bucks fans during this series.