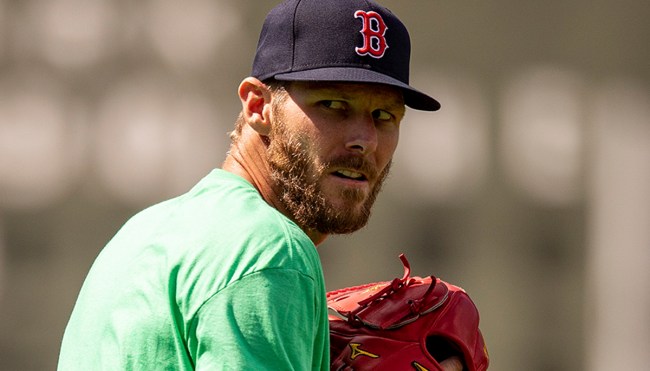 There aren’t many jobs in the world of sports that are accompanied by the kind of pressure pitchers usually face when they trot out onto the baseball diamond, as there is ample opportunity to either be painted as a hero or a scapegoat when you’re on the mound.

With that said, it appeared the stakes were pretty low for Chris Sale on Wednesday night. The Red Sox hurler has missed all of the current season thanks to a rib fracture he succumbed to in February, but he recently started gearing up for his return to Boston via some rehab stints with the franchise’s minor league affiliates.

Sales fared pretty well during his Double-A appearance in Portland last week, as he surrendered one run and four hits over the course of four innings. While he did post some fairly respectable numbers in Worcester on Wednesday, his performance was marred by the five walks he gave up (including one that came with the bases loaded), and he was not shy about voicing his displeasure with his own performance while talking with NBC Sports after the outing:

“Not good. Decent at times. Just, command was bad today. Nothing’s easy in this game, but things that are easier to clean up…

I had the best fastball, the best slider, and the best changeup tonight. Just not consistently. That’s not going to fly in the big leagues.”

It’s safe to say those comments don’t do much to reflect just how frustrated Sale was after he was pulled based on a video of him doing some major damage in the tunnel leading to the clubhouse, as a fan captured him taking his anger out on an array of inanimate objects that were unlucky enough to be in his immediate vicinity.

VIDEO: #RedSox pitcher Chris Sale upset after giving up a bases loaded walk & being taken out after 3 & 2/3 innings in a rehab start for the @WooSox (📸: @bri4homes) @NBC10Boston @NECN pic.twitter.com/1j1ga5kJaT