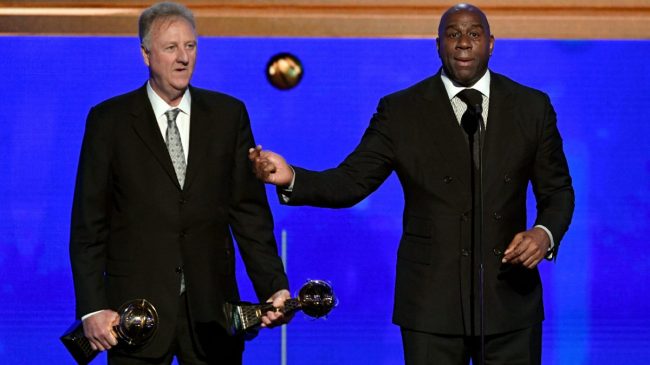 LeBron James always seems to come up in debates regarding NBA players and their impact on the game. And in the case of LeBron followers, there is a strong line drawn in the sand. You either love him or hate him.

He’s easily the most talked about athlete in the game, which makes sense with his status as one of the top two players in the history of the sport.

The guy has done it all. He’s led three different franchises to NBA titles, winning four championships as a player. He essentially started the movement to organize “Super Teams” by taking his talents to Miami to join forces with Dwyane Wade and Chris Bosh.

He’s a hometown hero to the city of Cleveland and his legacy on the court speaks for itself.

Still, everyone loves to debate whether or not he’s deserving of these accolades.

The latest argument came earlier this week on ESPN’s First Take, with co-hosts Stephen A. Smith and Christopher “Mad Dog” Russo butting heads on the idea that James is the second-best player of all-time.

Russo threw in a name that many didn’t expect to hear when discussing the topic, and it has LeBron supporters up in arms.

Russo is asked which player he’d take in a Finals series with the game on the line.

Russo is quick to note that this is during the time when Larry Legend won three straight NBA MVPs as opposed to the full length of his career. Still, it’s quite the statement.

The First Take personality notes his abilities as both a shooter and passer. He specifically mentions the 1984 Finals where Bird outplayed Magic Johnson to lead the Celtics to a championship.

His biggest slight to LeBron was that he didn’t show up in the 2011 series versus Dallas, noting an eight-point output in a three-point loss in Game 4.

The Mavericks closed out the series 4-2 after Miami had taken an early 2-1 lead.

LeBron Supporters Were Quick To Disagree With Russo’s Assessment

As expected, the LeBron crowd came out in full force to defend the four-time champ.

Okay, Larry Bird was a problem but let's not get carried away here 😂 https://t.co/uT3c37AbSD

So one series stops you from picking the best player to ever live? And it’s not even for mike or some shit. It’s for LARRY BIRD 😂😂😂😂😂😂😂😂 https://t.co/FDfm03ngwM

The only player I can hear an argument for over LeBron is Jordan. Any other player you try and put there is absolutely no argument https://t.co/CtNYBzJKRk

Having LeBron lower than 2 all time should disqualify you from basketball talk https://t.co/Mq5HcKOZ4N

If you want to put Jordan or Kareem over LeBron fine, it’s fair, we can debate. But if you put anyone else over him — let’s just not talk about it because you’re wrong and it’s no fun discussing clear agendas. https://t.co/xG2O6CAxE1

I will never disrespect Larry Bird but please stop. https://t.co/RxcCLqp4Ul