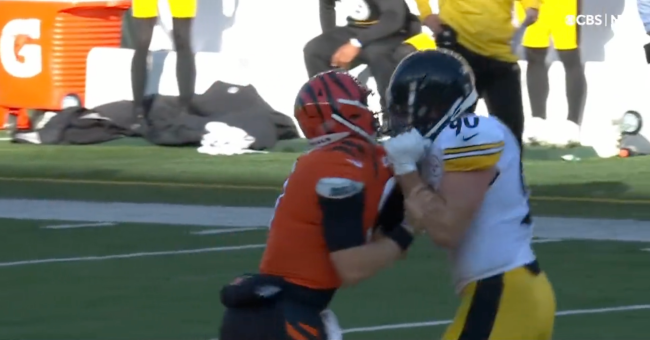 T.J. Watt is not on Cincinnati’s good side. Bengals fans are not happy with the Steelers’ defensive end after his performance on Sunday.

Just before halftime, holding a 24-7 lead, Joe Burrow threw an interception to Minkah Fitzpatrick. After the Pittsburgh cornerback secured the pick, Watt used the opportunity to take his frustration out on the quarterback.

Watt, who was “blocking” Burrow, took him by the pads, locked helmets, and threw him around like a rag doll. Burrow, of course, was the least viable threat to tackling Fitzpatrick on the play, so Watt was really just being a bully.

TJ Watt using an INT as an excuse to bully Joe Burrow pic.twitter.com/wsLC8aCw1i

Technically, Watt was not doing anything illegal. He was blocking Burrow within the confines of the rules and regulations, but he was clearly doing everything he could to shake Burrow around without crossing the line and drawing a flag.

Cincinnati took a 31-3 lead to the locker room at halftime and led 34-3 at the end of the third quarter. Despite the lead, Bengals fans were not happy.

The Who Dey faithful took to Twitter and expressed their frustration toward Watt. They were PISSED about what went down. Many of them called for a penalty flag.

TJ Watt then grabs and throws Burrow well after the play and the officials don't throw a flag, so Taylor is laying into officials after he didn't like the OPI call or the lack of protection for his QB after the pick.

TJ Watt’s feelings hurt so he goes after Burrow, just to have his QB throw a Pick 6. Can’t make this shit up 😂😂

Castellanos will clearly be suspended for Watt’s handling of Burrow.#Bengals

How about Joe Burrow and TJ Watt going head to head in a cage match at midfield?

Some serious grit points earned by Burrow after the INT. #Bengals

Credit to Joe Burrow for being one tough dude. Very few players in the league, let alone quarterbacks, would be willing to get into it with Watt. Although it wasn’t his choice, Burrow held his own in the scuffle and popped right up after Watt left him alone.