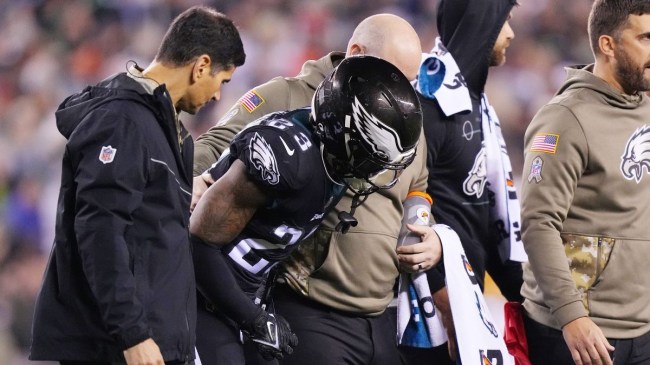 The Philadelphia Eagles made a statement of intent when they traded for New Orleans Saints safety C.J. Gardner-Johnson in the offseason.

The 24-year-old out of the University of Florida is one of the league’s best cover safeties and is in the final year of his rookie contract. That means that he’s likely in for a big payday following the season. But Philadelphia, as evidenced by its move for superstar wide receiver AJ Brown, is all-in on the present.

Gardner-Johnson has more than repaid the Eagles for their confidence. He’s racked up a league-leading six interceptions in 2022 to go along with 60 tackles, which is just six short of his career high with plenty of games left to play.

But now it appears Philadelphia will have to learn to cope without their young star for the foreseeable future.

Gardner-Johnson dropped to the ground clutching his midsection after a hit on Green Bay Packers wide receiver Christian Watson in the first half of a 40-33 Eagles’ victory on Monday night.

He did not return to the ballgame and Philadelphia coach Nick Sirianni didn’t have an update on his condition when asked on Monday.

About two hours ago, Nick Sirianni was asked about the extent of CJGJ's injury.

Sirianni: "Hopefully not [an IR stint], but we're not there yet. I know he was in some pain yesterday after he took that hit."

As it turns out, the news wasn’t good.

#Eagles safety C.J. Gardner-Johnson is out indefinitely after suffering a lacerated kidney in Sunday night’s win over the #Packers, per sources.

It’s a non-surgical injury. Testing is ongoing, so timetable still TBD, but it is not expected to be season-ending.

NFL Network’s Tom Pelissero reported on Tuesday morning that Gardner-Johnson suffered a lacerated kidney on the play. While the injury is non-surgical and likely not season-ending, it still could keep him on the shelf for a significant period of time.

Latest on the Philadelphia Eagles S CJ Gardner-Johnson. Timeline will depend on overall severity but would expect him back prior to the playoffs.#NFL https://t.co/a5J8TnBh1q

The University of Utah’s health department reports that the injury isn’t uncommon among football players. But that it will likely keep Gardner-Johnson out 1-2 months. More severe cases could cause significant internal bleeding and cause lifelong implications. ‘

Thankfully, that does not sound like it’s the case for Gardner-Johnson. But Eagles fans were still willing to pitch in their own kidneys to help.

That Gardner-Johnson walked off the field at all is a telling reminder that football players aren’t like the rest of us.