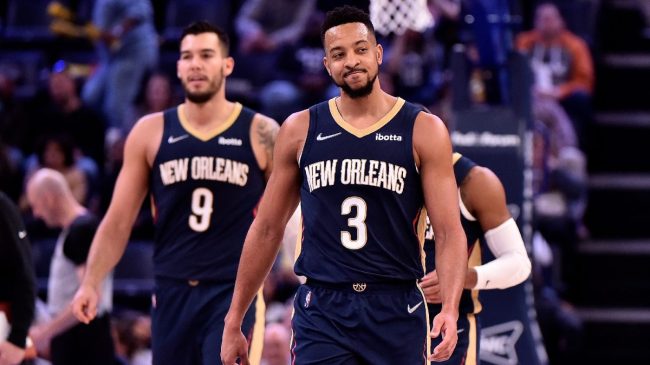 The Pelicans will wrap up their 2022 NBA regular season on Sunday with a contest against the Warriors.

The game shouldn’t have too much riding on it as both teams are safely in the playoffs. New Orleans will be participating in the play-in round while Golden State holds the No. 3 seed in the Western Conference.

For all intents and purposes, this will be a tune up game for the postseason as neither team can improve their standing.

With these late season contests between playoff bound foes, we’ll often see star players sit out in order to prevent injury ahead of more important postseason matchups. It looks like that will be the case for the Pelicans, and guard CJ McCollum is warning bettors of adding him to their Sunday night parlays.

Check out his hilarious tweet from early Sunday afternoon.

CJ McCollum with a PSA for bettors today 😂 pic.twitter.com/9oKKjxNxuh

“I will be playing a few minutes tonight before heading to the bench… Don’t take me in your parlays tonight.”

The post has since been deleted, and many sportsbooks have now removed McCollum from any betting lines in the contest.

It looks like McCollum plans to sit on the sidelines for the majority of Sunday’s action, saving himself for the upcoming play-in contest.

I’m sure there were more than a handful of bettors that were appreciative of the honesty in regard to his status for the season finale.