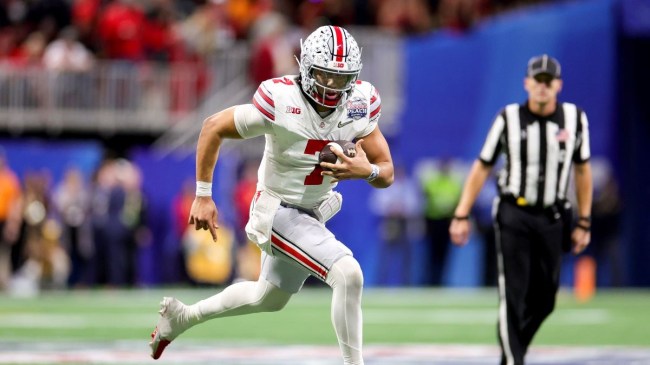 After TCU upset Michigan in an all-timer of a College Football Playoff semifinal in the Peach Bowl, Ohio State and Georgia had a lot to live up to.

The Buckeyes and Bulldogs then went on to not only meet the standard set by the Horned Frogs and Wolverines, but they may also have cleared it.

Ohio State played its best game of the season and took a 38-24 lead into the third quarter. But the defending national champs showed no sign of quitting and battled back to take a 42-41 lead with under a minute remaining.

CJ Stroud then took the Buckeyes right down the field and into Georgia territory for a game-winning field goal attempt. But Noah Ruggles’ 50-yard attempt missed wide left and the Bulldogs escaped to advance to the title game against the Horned Frogs.

Georgia quarterback Stetson Bennett was named the game’s MVP with 398 yards passing and three touchdowns. But Stroud was as good or better. The potential No. 1 overall pick in the 2023 NFL Draft went 23-of-34 for 348 yards and four touchdowns. He also had a standout day rushing. While the final stats show 12 carries for 34 yards, that total includes over 30 yards lost due to sacks.

Stroud was magnificent throughout with his feet. But one such scramble ended poorly for an unwitting woman on the Ohio State sideline.

Late in the fourth quarter, Stroud rolled left to escape the Dawgs’ pass rush. He then sprinted for about five yards before being pushed out of bounds by Georgia defenders.

Unfortunately, the 6-foot-3, 218-pound quarterback was unable to slow up before absolutely leveling a woman working on the Buckeyes’ sideline.

It was an absolutely thunderous hit that most people wouldn’t get up from without some assistance. Instead, the woman popped right back, much to the amazement of fans watching.

She took that hit like a champ. I hope she’s OK

lady on the sideline took that hit like a champion. popped right back up.

She took that hit and popped right back up 💪 pic.twitter.com/kvNL6m8fvb

CJ Stroud just BLEW UP that girl on the sideline. She’s tough as nails! #OSUvsUGA pic.twitter.com/X8Q0ek4N4j

Props to that girl taking the hit on the sideline from Stroud & getting right back up! #CFBPlayoff

To this point, no one has identified the woman. But she got back up and back to work in a way that 99 percent of normal people wouldn’t have. What a beast.