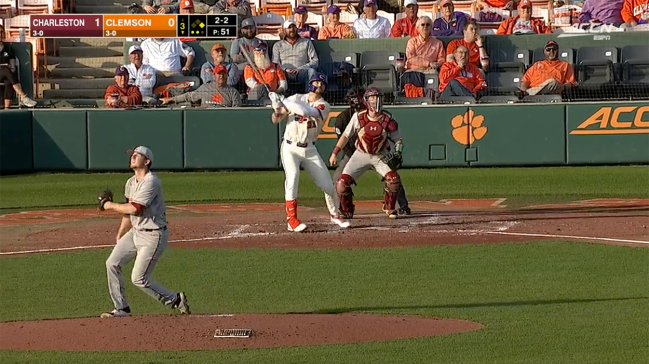 Clemson baseball is off to a hot start this season. The Tigers won their opening weekend series against Indiana by a combined score of 33-8 and hit one of the craziest home runs that you will ever see against Charleston on Tuesday.

It isn’t the longest home run of all-time (even though it was a moonshot), nor is it the most important. It didn’t come with an epic celebration and it wasn’t hit by a future MLB Hall of Famer or anything like that.

Even still, it will blow your mind.

Tuesday’s game was played on February 2, 2022— also written as 2/22/22. During the second inning, sophomore Caden Grice stepped up to the plate with 2 outs and one runner on.

After working a 2-2 count, Grice dug into the box and sent the Charleston pitcher’s offering SOARING over the left-centerfield wall for a 2-run home run. It was his 2nd bomb of the year.

With the home run, the Tigers took a one-run lead over the Cougars.

While that is well and good, it is the circumstances of the home run that need to be broken down. It is the most “2” dinger of all-time, let’s take a look:

Here is the absolute madness written out, if your brain hasn’t already exploded yet:

The only way that it could have been better is if Grice wore the number 22 and the home run gave Clemson a two-run lead in the second inning. Insane.