Clemson QB D.J. Uiagalelei Has Life Figured Out, Says His Favorite NFL Team Is Any In A State With No Income Tax 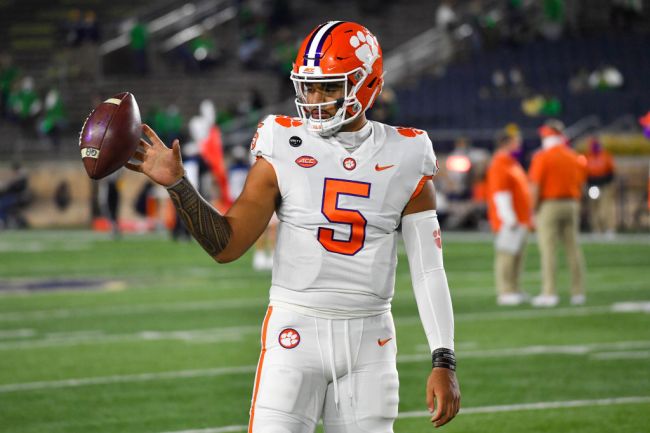 D.J. Uiagalelei is stepping into one of the most pressurized situations in all of college football this season taking over for Trevor Lawrence at Clemson, but is still thinking about the big picture.

As he’s filling in the shoes of one of the greatest college quarterbacks ever at one of the best programs in the country, Uiagalelei has gotten a sweet taste of that NIL money. He recently announced that he signed a deal with Bojangles, which is just one of the largest brands of what I assume are many he’ll be working with during his college days.

He’s going to be fine on the finance side of things for years to come, but he’s looking to stretch that money as best he can, which means paying the least amount in taxes as possible.

Uiagalelei was asked who his favorite NFL team was, and instead of giving a straight-up answer and naming a team, he explained his favorite was any team located in a state with no income tax.

DJ Uiagalelei is asked if he has a favorite NFL team: “The team I want to go to is whatever team doesn’t have state taxes.”

NFL Teams In States With No Income Tax

For Uiagalelei’s wish to come true about eventually being drafted by a team with no state income tax, he’d need to go to the Cowboys, Texans, Titans, Raiders, Seahawks, Dolphins, Buccaneers, or Jaguars. The odds of him being drafted by one of those teams aren’t all that bad, really, as those eight teams make up 25% of the league.

Uiagalelei won’t be able to completely avoid state income taxes if he plays for one of those eight teams, however. Thanks to the Jock Tax, which levies taxes against professional athletes when they play a game in certain states and cities.

As someone who grew up in Tennessee, that’s lived in both New York City and Philadelphia, I can confirm paying state income tax sucks.