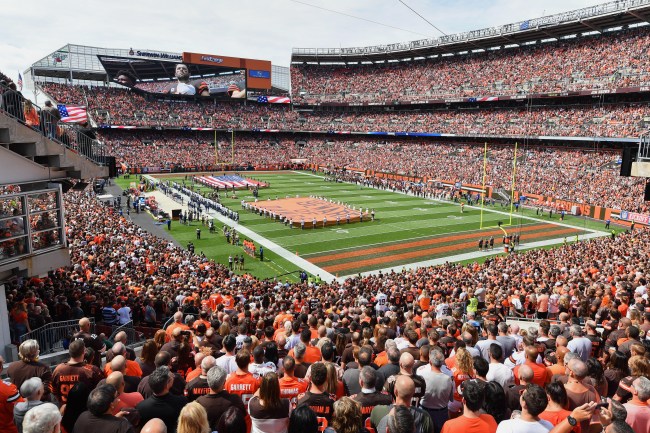 The Cleveland Browns hype train got derailed in Week 1 after the Tennessee Titans came into to town and gave them an old fashioned as kicking.

The @Titans are destroying the Browns right now and Cleveland is shook pic.twitter.com/7UG38hQJYy

Not only was the team a mess but Baker Mayfield looked real bad down the stretch as well.
.

Baker just threw his 3rd INT of the 4th q, a pick 6. He has come completely apart after an MVP-quality opening drive. He will snap out of it. He will be very good this year. But he will have a hard time keeping his receivers happy and living up to runaway expectations.

Baker Mayfield completely collapsed in this one. 3 INTs in the 4th quarter, last one was a pick-6 and now losing 43-13.

They are 3 minutes left in the game.pic.twitter.com/0mXNcbNkmt

One Browns fan was so fed up with the loss that he decided to burn all of his Browns gear in his front year.

Browns fans are burning their jerseys and it’s only Week 1! 😂 #Steelers pic.twitter.com/EvZXo3oyPq

After the game Baker acknowledged that some fans were going “through them in the trash” but he promises the team will bounce back.

We’re gonna throw this in the trash and that’s good. I know what type of men we have in this locker room. And quite frankly, I don’t really give a damn what happens on the outside. I know how we’re going to react. We’re gonna bounce back.”

Baker Mayfield “Everyone is going to throw this in the trash” #Browns pic.twitter.com/vT9IM2eAmw

"Everyone is going to throw us in the trash." "Quite frankly I don't really give a damn what happens on the outside." Baker on the perception of the #Browns after the Week 1 loss.