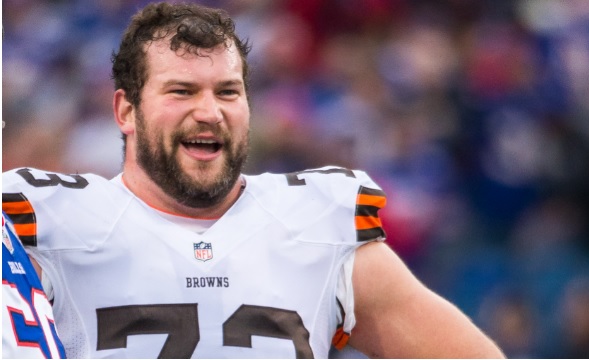 Former Browns offensive tackle Joe Thomas retired back in 2017 and at the height of his football career he weighed north of 310+ pounds.

Since retiring from football Thomas has dedicated himself to slimming down and losing some of that football weight.

The significantly trimmer former Browns tackle and future Hall of Famer appeared on NFL Network’s Inside Training Camp Live on Monday in a tan suit with freshly coiffed hair. Addressing the elephant in the room (or lack thereof, considering his slim look) immediately, NFL Network’s Andrew Siciliano asked Thomas about his weight loss.

“I was more eager to lose weight than almost anything in retirement,” Thomas said.

And lose, he did. Fresh off the most losing season possible — Thomas’ Browns finished 0-16 — the tackle doubled down on the Ls, dropping the LBs for one massive W. The left tackle who spent most of his playing career playing in the 310-pound range has lost 50 pounds since he played his final NFL snap.

Today Andrew Hawkins posted a picture of Thomas’ before and after pics of his weight loss and the former Browns lineman looks completely unrecognizable.

Use the Retweet button as a round of applause for @joethomas73 incredible transformation. pic.twitter.com/JkquDuRRN4

The Internet was impressed with Thomas’ transformation.

Joe Thomas trying to make everyone believe he is @aaroneckhart pic.twitter.com/IPdULZ0ewb

What’s Thomas’ secret to shedding off the weight? Intermittent fasting+Keto.

Facts: I think the first 25 fell off in a month, than I had to kick my butt to keep going. Swimming is the best from a cardio standpoint, and #keto w/ intermittent fasting is gold. I can eat 1500-2000 cals/day and feel full. https://t.co/HToJA3VVat