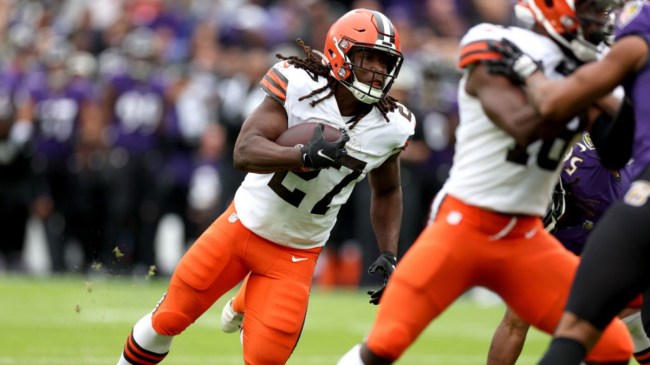 The Cleveland Browns entered the season knowing things weren’t going to be easy this year. They made a blockbuster trade for a starting quarterback, but Deshaun Watson won’t be available until Week 13. They also had to revamp a depleted wide receiver corps after the departures of Odell Beckham Jr and Jarvis Landry.

Despite the struggles they were expecting to face this season, the team has been very competitive this year, only suffering one loss by more than 3 points in the first 7 weeks of the season.

Unfortunately, they just haven’t been able to urn enough of this close games into wins. They currently hold a 2-5 record and have lost their last 4 games.

That has made them a prime candidate to be sellers at the trade deadline. According to a report from ESPN’s Jeremy Fowler, there are a few players the Browns have been unhappy with this season, which could lead to them being dealt before Tuesday.

Cleveland Browns are unhappy with the performances of multiple players

Sounds like a 4th round pick would get a Hunt deal done.

This part was interesting from Fowler: The Browns are low-key unhappy with the performances of several key players. pic.twitter.com/F3EG0wPTBt

One player in particular they seem ready to trade is Kareem Hunt.

Cleveland is firmly on my radar. The Browns are low-key unhappy with the performance of several key players. Teams I’ve talked to believe Kareem Hunt is available for a fourth-round pick. Hunt’s $1.35-million salary is attractive; his $200,000 per-game roster bonuses are not. But the Browns could always restructure those bonuses into a signing bonus to make him more trade friendly. Cleveland has received multiple calls on cornerback Greedy Williams, but nothing is imminent there. So, while I expect Cleveland to be thoughtful and calculated in what it does, there’s also a feeling that trading away a few veteran players might not be so bad.

A Hunt trade wouldn’t be much of a surprise for the Browns. Hunt briefly held out at camp over the summer and has been looking for a new contract. Unfortunately, he’s just not really a necessity for the Browns as they already have Nick Chubb, who has continued to be one of the league’s best running backs this season.

It looks like the Cleveland Browns are ready to start preparing themselves for their first full season with Deshaun Watson.