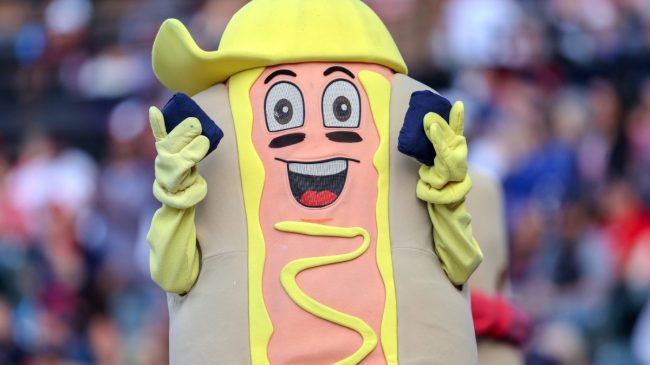 The Cleveland Guardians have demoted their mustard mascot following what’s been a rough 2022 season. The mascot has been a part of 50 races at Progressive Field this year, going winless in all 50 contests.

Both ketchup and onion have recorded 25 victories, successfully blanking mustard on the scoreboard.

The team released a statement following the demotion, with no timetable on a possible return.

Optioned Mustard to High-A Lake County. The club did not make a corresponding move.

Mustard, 17, has struggled at a historic pace this season, failing to secure a victory in any of the first 50 Sugardale Hot Dog races at Progressive Field in 2022 (one race was rained out). The tantrum-throwing condiment is being sent down to the Guardians High-A team – the Lake County Captains – to try and get his mental and physical game back to a MLB-caliber level. He is expected to report to the Captains on Monday and race in Tuesday’s contest.

It’s not the first time that the mascot has made headlines this season.

In a race last month, mustard had a wardrobe malfunction that led to an embarrassing defeat. The condiment lost its pants, causing a trip and fall mid-race.

It seems that he’s been unable to recover.

As you could imagine, the response on social media was hilarious. The most important question is, “Why didn’t the Guardians replace mustard with another mascot during this minor league stint?”

What is this team doing?

How are you going to have a playoff run with only 2 condiments? You had a chance to call up Relish or Bacon. You could have traded for a Brewers sausage.

Instead you did nothing?

Here are a few more reactions to the news.

The Heartbreaking Moment Mustard Found Out He Got Sent Down To High A 💔 pic.twitter.com/hVJMq9UA6F

We’ll see if the condiment is able to correct its struggles in what we hope will be a brief minor league stint.