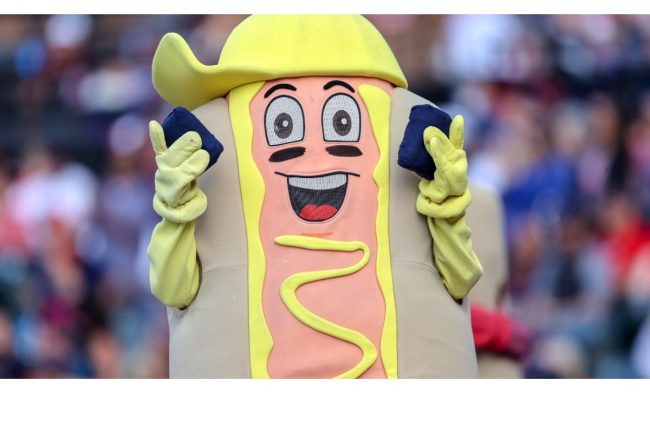 Sunday’s matchup between the Kansas City Royals and Cleveland Guardians brought fans an opportunity to watch two rivals from the AL Central face off in a little afternoon action.

The Royals jumped out to a 5-0 lead before leaving with a 5-1 victory to send the home crowd back happy. But fans got an extra treat during the 7th inning stretch.

The mid-inning challenge started off great for mustard, as he jumped out to a commanding lead. Unfortunately, things took a turn for the worst in a hilarious series of events.

After jumping out to that early lead, mustard’s pants began to fall down. Rather than give up, he tried to hop and skip the remainder of the race.

You’ve got to love the commitment.

After a few moments, mustard was passed by his competitors before the condiment took a face first fall, ending any chances to win the mascot race.

It was both brutal and hysterical to watch. You could see it coming as the yellow bottoms began to slip down. The social media reaction was great.

The dedication from Mustard is unmatched pic.twitter.com/XdX7VKZi6b

Poor Mustard got left in the dust @Starting9 pic.twitter.com/dhYvZdm94n

Mustard is my Sunday parlay: pic.twitter.com/8OlhEiU0Sv

“Look at mustard… loses his pants, down around his ankles. And a face plant!” pic.twitter.com/bNcfES0Qds

Ketchup would go on to win the race, with relish coming in second. Mustard was left far behind in the mascot race following the fall but is expected to make a full recovery.

He’ll hope to work on that wardrobe malfunction before next race to avoid another embarrassing tumble.