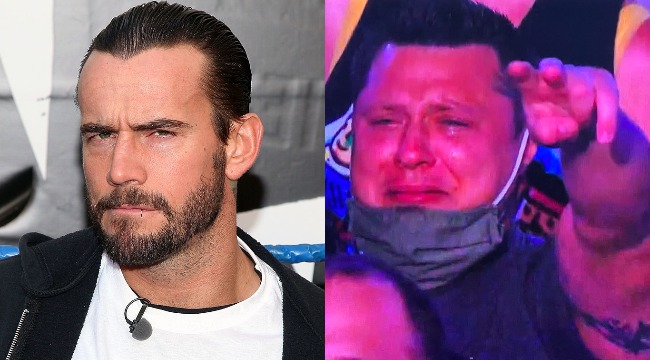 Coming from a guy who cried during an episode of Extreme Makeover: Home Edition, I am in no position to mock anyone with moist tear ducts. I self-identify as a Cry Guy. Crying is healthy.

But so if farting, and it’s still funny.

Chicago’s United Center, around 10:30 pm ET, was fertile grounds for waterworks, as fan favorite and Chicago native CM Punk came out of a seven-year retirement to make his long-awaited All Elite Wrestling debut.

For perspective on just how universally loved CM Punk has become over the years, AEW set a company-record crowd of 15,316, selling out the United Center in Chicago four minutes after tickets went on sale to the general public, according to Sports Illustrated. It also set its single-event merchandise sales record of more than $200,000 and prelim numbers from the top ten TV markets indicated ratings were up 57 percent from the initial Rampage event a week prior.

This is what that degree of admiration sounds like.

Such a cool moment. pic.twitter.com/ZMMqXUIvNW

This is what that degree of admiration looks like.

The merch line is up to the second floor BAH GAWD!!!! #AEWRampage #CMPunk pic.twitter.com/AubqLN2yKf

This is what that degree of admiration feels like, with the AEW production crew catching a grown man nearly drowning in a puddle of his own tears as “Cult of Personality” echoed through the entire stadium in what Punk would categorize as the “greatest night of my career.”

CM Punk is literally wrestling jesus in Chicago, no other wrestler could get grown men to cry in that city 😭😭
pic.twitter.com/22OdGKeY9S

While the vast majority of people online connected with being emotionally moved by a moment in sports or entertainment, Cry Guy got some Aggro dudes in need of a hug criticizing his show of vulnerability.

Nah grown men crying witnessing CM Punk, what the hell is going on

I totally get people being happy for this.

But why are people crying lol? It's not like CM Punk overcame an injury like Edge. He left WWE and spent years trolling and taking shots and then went back to wrestling after failing in MMA.

Be happy but the tears are cringe 😂

And that guy crying for cm punk pic.twitter.com/VWAXiz3PTK

“I’m a Chicago sports guy,” he said. “I cried when the Cubs won the World Series, I cried when the Blackhawks won the (Stanley) Cup, the times I was alive when they won the Cup, not back in the 60s. It means a lot and it means a lot because I’m so attached to Chicago and sports, especially. I understand. Anyone making fun of that dude, you’re making fun of me too. There is nothing wrong with being emotional at sporting events or anything you like. I’ll cry at a Marvel movie.”

Cry Guy’s tear ducts are in for a workout, as wrestler and promoter Tommy Dreamer offered to fly the fan to IMPACT Wrestling’s [Bound For Glory] and pledged to contact CM Punk or Tony Khan for a meet and greet.

Thank you for listening @BustedOpenRadio
Great show & crying CM Punk fan
Get a hold of me or @BustedOpenRadio
I'm gonna fly you to @IMPACTWRESTLING BFG
I❤your passion
I will also hit up @CMPunk & @TonyKhan for tix or a meet & greet
F*CK the Haters online
We appreciate you pic.twitter.com/Qdl05w8BNi

“Crying CM Punk fan, get a hold of me or Busted Open Radio,” Tommy Tweeted. “I’m gonna fly you to IMPACT Wrestling’s [Bound For Glory]. I love your passion. I will also hit up CM Punk or Tony Khan for a meet and greet. F*ck the haters online. We appreciate you.”

Many people wish they cared about anything as much as Cry Guy cares about wrestling. That’s a gift.