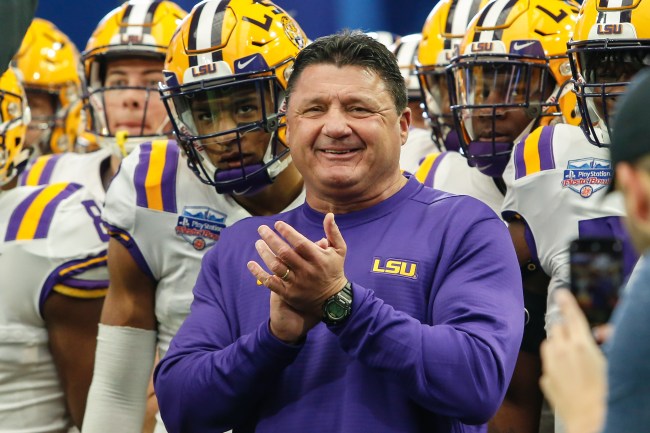 It seems like Coach O is enjoying his time as a bachelor.

LSU football coach Ed Orgeron has filed for divorce from his wife, Kelly.

Orgeron filed the divorce petition Feb. 26 in East Baton Rouge Parish Family Court, stating he and his wife separated Feb. 24 “and have lived separate and apart without reconciliation since that date.”

Six months after his divorce was made official a picture of a shirtless Coach O in bed with a much younger woman made the rounds on the Internet.

Coach O won that championship got a divorce and turnt up pic.twitter.com/MERclfKWMf

Losing on the field but winning off the field. Coach is O is cementing himself as a legend in Baton Rogue pic.twitter.com/vQvywfFxtx

Is this how Coach O handled LSU’s self imposed NCAA penalties? 😎 pic.twitter.com/KFlaa8I9VL

Damn, Ed Orgeron may actually be the goat pic.twitter.com/ysS5zqm9gU

How it started. How it’s going. pic.twitter.com/mxMl1rdBVv

When Coach O has a better dating game than me pic.twitter.com/AQOHfmUO1X

While 2020 has been terrible for pretty much everyone it seems like Coach O is still finding a way to win this year.