Coach Suspended After Being Involved In Controversial UFC Fight 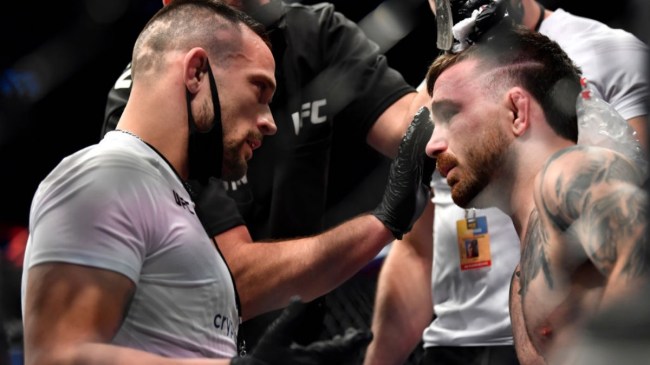 It looks like one of the strangest situations hanging over the UFC in recent weeks has reached some kind of conclusion.

Two weeks ago, Darrick Minner was scheduled to take on Shayilan Nuerdanbieke on a UFC Fight Night card. Minner was the underdog heading into the fight, but on fight day, his line moved from +200 to +300, which is unusual to see the day of a fight.

During the fight, the story really took a strange turn. In round 1, Minner injured his leg while throwing a kick and was quickly finished by Nuerdanbieke.

The whole thing seemed fishy to fight fans and it even ended up being investigated, but there hadn’t been any updates on the situation until this week.

Earlier in the week, it was reported that Minner could end up facing discipline from the Nevada State Athletic Commission for not disclosing the injury to the commission before the fight.

Now it appears that the UFC may have taken action of their own stemming from the incident.

Minner trains at a gym called Glory MMA. One of his teammates, Miles Johns, fought on today’s UFC Fight Night card and defeated Vince Morales by decision. In his post-fight interview he revealed that his coach, James Krause, had been suspended by the UFC.

Johns didn’t give any more details during the post-fight interview or afterwards, but it seems likely that the suspension stems from that fight early in the month, where Krause was in Minenr’s corner.

While some may see this as something nefarious due to Krause’s reputation for betting on fights, it is very much a possibility that he is being punished for the same reason Minner may be.

The UFC can’t be happy about coaches hiding significant fighter injuries from them, especially with the way it impact the UFC 280 co-main event as TJ Dillashaw entered his title fight with Aljamain Sterling with a shoulder injury that clearly compromised him in the fight.

Whatever the reason for the suspension, we surely have not heard the end of this Darrick Minner situation