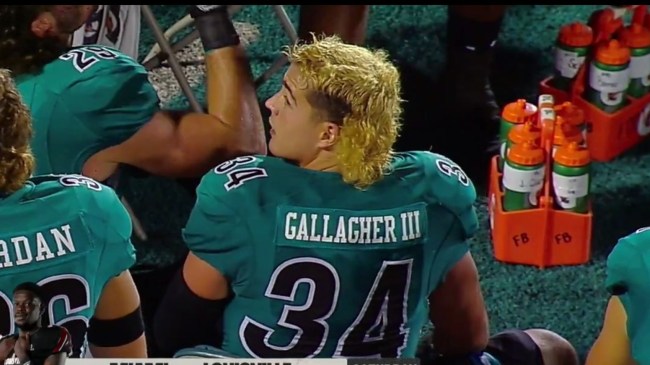 No. 15 Coastal Carolina is 8-0 after a come-from-behind victory over Appalachian State on Saturday. Not only does the team from Conway, S.C. hold its highest ranking in program history after joining the FBS level in 2017, but it’s full of a bunch of savages.

We work the hip toss every Tuesday in QB indy. pic.twitter.com/b8qRr5JsT8

Senior linebacker Teddy Graham has been the poster child for the Chanticleers with his bleach blonde mullet flowing from his helmet. ESPN’s Marty Smith deemed the glorious lettuce “the Chanticleer Chandelier” and it pairs perfectly with the team’s defensive prop, the “turnover cloak”.

Coastal is running a creative offense under head coach Jamey Chadwell, popping opponents in the mouth on defense and touts a Big 12 win over Kansas. They’re legit and the locker room celebrations are just as good as the on-field antics.

Their best work came after beating the Georgia Southern Eagles. The strength staff (I assume) donned classic wrestling garb and beat up on a costumed eagle.

Facing its biggest matchup of the season thus far on Saturday, Coastal fell behind 17-9 to Appalachian State at halftime and scored 25 points in the second half to pull out a 34-23 win. The dub all but guaranteed the Chants (pronounced with a long a) a spot in the Sun Belt Championship game and kept their unscathed record in tact. It was a hard-fought win against a quality Mountaineers team, and Gallagher had a few thoughts when the clock hit zero.

Gallagher, who has taken the nation by storm with his polarizing personality and luscious locks, was injured in the first half and forced to come off of the field— but returned later the game and went toe-to-toe with one of the better non-Power Five conference teams in the nation. He showed respect to the opponents when he got back in the locker room.

Nothing but respect for that team in Boone! That’s a top 25 football team

However, that didn’t last long, as Gallagher remembered how his opponents reacted when he went to the sideline.

Haha just kidding forgot they cheered when I got hurt! Have a safe drive back to Stinky Smelly Cold Boone you bums

Coastal will face Texas Tech next weekend before squaring off with Hugh Freeze’s rising Liberty program. Gallagher will surely be ready.