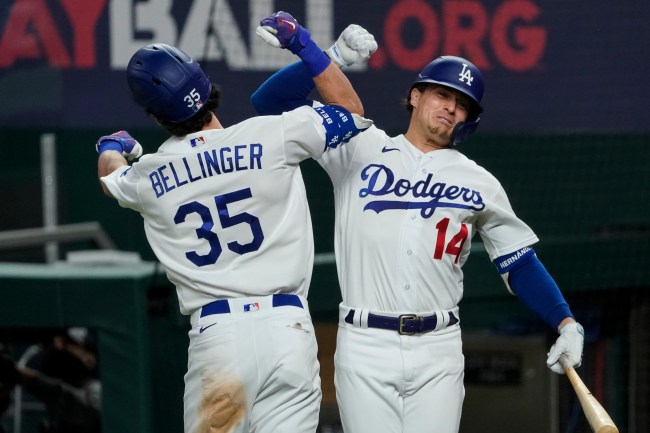 The Los Angeles Dodgers rallied from a 2-0 series deficit against the Atlanta Braves and found themselves down 3-1 before rattling off three elimination-game wins in a row to win the NLCS. The Dodgers will now face the Tampa Bay Rays and their $28,290,689 payroll. Meanwhile, the Dodgers have the second-highest payroll in the MLB at $107,917,397 and this HAS to be the largest payroll disparity ($79,626,708 difference) in World Series history but I’ll let someone with more time and energy verify that stat for me.

The Atlanta Braves jumped out to an early 2-0 lead in Game 7 after grabbing a run in the first and another in the second inning. The Dodgers responded with 2 in the bottom of the third. The game was tied up 3-3 as the Dodgers went to the bottom of the 7th inning and that’s when first baseman Cody Bellinger worked his magic.

Bellinger launched a BOMB into right field and scored the winning run, putting the Dodgers up 4-3 in the game and only six outs away from victory. After rounding the bases, Bellinger celebrated a little too hard and actually dislocated his shoulder while banging arms with Kiké Hernandez. You can see him jump up and smash arms and then he sort of spins away from the next celebration and shortly thereafter went into the locker room to have it popped back into place so he could remain in the game.

Here are the home run and the celebration with Bellinger’s quote below explaining what happened. It’s the second celebration (with Hernandez) where he popped his shoulder out, something he’s done each of the past two years:

When asked about what happened, Bellinger had this to say:

“I hit Kiké’s shoulder a little too hard and my shoulder popped out, so I had to go back in the training room,” Bellinger said on MLB Network. “They popped it back in and I was ready to play some defense. It kinda hurt.

“I’m going to maybe use my left arm [in the future]. I’ve never dislocated that one.”

“You can take a positive out of everything and the positive here is that Belli now knows that he can’t mess with people that are way stronger than him,” (via SI)

This, my dudes, is an injury I can sympathize with. I’ve got some messed up shoulders and once popped a shoulder out of its socket rolling over on the couch after my arm was trapped underneath me. Mine appears to have something to do with my double-jointed hand and stretchy ligaments (destroyed me knee a few times) but I can’t speak to what the nature of Bellinger’s injuries are, just that it’s extremely painful.

Now the Dodgers will take on Tampa in the World Series which starts Tuesday and airs on FOX. To get to the World Series the Tampa Bay Rays had to go through the Toronto Blue Jays in the Wild Card games (19th), followed by series against the New York Yankees (#1 payroll), Houston Astros (#4 payroll), and now the Los Angeles Dodgers (#2 payroll). How anyone outside of Los Angeles could be rooting against the Rays at this point is beyond me.