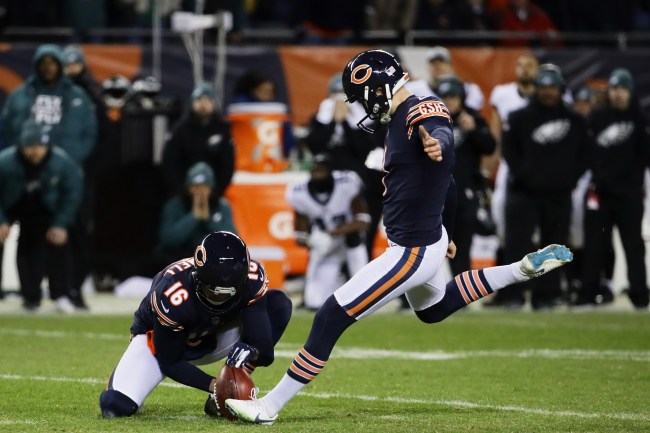 It’s been a rough week for Chicago Bears kicker Cody Parkey since he missed a game-winning field goal with seconds left on the clock. He jogged off the field to deafening boos and has been berated on social media all week long.

Cody went on the TODAY Show this morning where he was asked about the miss and what it means to him and his career. I’m not a Bears fan, I don’t know much about Parkey, but I was very impressed by how he handled himself in this interview.

There are two quick clips, around 90 seconds in total (60+30) and they were uploaded to the TODAY Show‘s Twitter account. It sure sounds like Cody was confident he’d make that kick while squaring up, which he should’ve been since he’d already made three.

“As a kicker, you live for those moments – I had a lot of confidence going into that kick…I’m disappointed.” @ChicagoBears kicker @CParkey36 on last Sunday night’s field goal that would’ve sent his team to the next playoff round pic.twitter.com/SEV87eKgs7

“I haven’t been on social media or anything like that.” –@ChicagoBears kicker @CParkey36 pic.twitter.com/x8TIgsf1Xo

He said something along the lines of ‘football is what I do, it’s not who I am’ which is a pretty profound statement for a guy who’s just cost his team an NFL playoffs game after his kick was tipped. But this can also be interpreted a few different ways.

You don’t see guys like Bill Belichick and Tom Brady going around saying stuff like this. This is a statement that helps someone coping with a loss, not a win. It’s an emotionally mature response, sure, but it’s not something you hear winners say.

He’ll likely be back next year with a $3.5 million guaranteed contract (bonus + salary). He’ll make over $4 million next season if he’s in a Chicago Bears uniform. Because of the Salary Cap in the NFL, releasing Parkey could hurt the Bears’ chances in the free agent market.

His numbers were getting better as the season progressed despite missing the 2nd most kicks in the NFL last year. I just can’t envision a world where the fans don’t revolt if Parkey is the kicker, not after the way things ended this season.