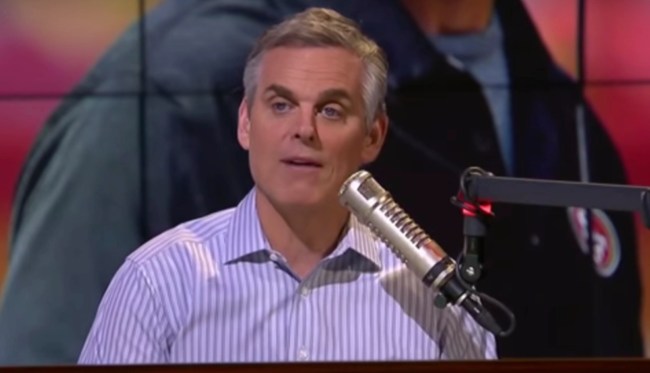 There have been some terrible opinions on sports debate shows over the years but Colin Cowherd’s Patrick Mahomes take on Tuesday’s edition of “The Herd” might be the dumbest hot take of all-time.

On Sunday night, Mahomes was forced to leave the Chiefs-Browns game after landing awkwardly following a tackle.

Mahomes is still currently in the concussion protocol and it’s still unclear if he’ll be cleared to play on Sunday.

Chiefs’ QB Patrick Mahomes cleared certain steps Monday, “some big steps”, but he remains in the NFL’s concussion protocol with what is considered a concussion and it’s too early to say that he definitely will play in Sunday’s conference championship vs. the Bills, per sources.

During his show on Tuesday, Cowherd bizarrely suggested that the NFL postpone Chiefs-Bills game on Sunday until Mahomes was healthy enough to play.

We want Mahomes vs Josh Allen, I think that’s reasonable. I’m sitting here this morning thinking if I’m the NFL, Patrick Mahomes is going through the protocol, I find a day Patrick Mahomes can play and that’s when we’ll play. Why not?

Cowherd got immediately roasted by the NFL fans over his terrible take.

The best part is that @ColinCowherd talks about what’s “reasonable” while delivering one of the worst takes of all time https://t.co/ngJHekoLYQ

There are bad takes and then there are BAD takes. This is a BAD take. https://t.co/K9TBf4hCG6

The 2008 season should have been postponed until Tom Brady’s ACL was back at full strength. https://t.co/yoZvz2Smre

"…WHY NOT!" We missing these takes guys? I didn't think so. Instead, I get to talk about Purdue, the B1G, and our local high school teams. Much better way to spend air time don't you think? https://t.co/8w8doddEHz

Cowherd just says stupid stuff to get attention. No way he believes half of what comes out of his mouth on air. https://t.co/d4CledgNfK

This could be one of the worst takes I’ve ever witnessed… 🤦🏼‍♂️ https://t.co/ZZBb4pRlyY

Yes @NFL please also go back in time and pause the 2008 season until after Plaxico has healed from his gunshot wound. Much appreciated https://t.co/iaRMYiRvrY

Probably one of the worst takes I have ever heard in my life. https://t.co/NA138ytVjS