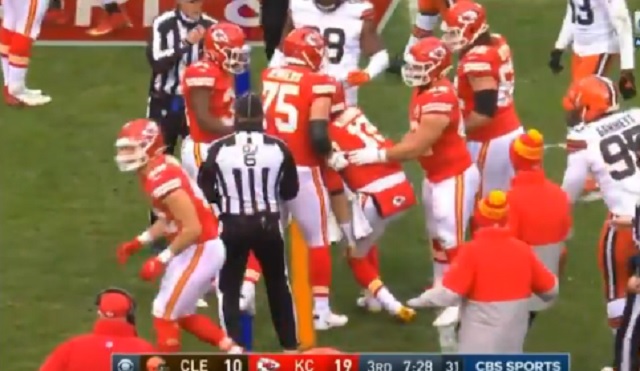 There was a scary scene in the Browns-Chiefs divisional playoff game and it involved the NFL’s biggest superstar.

On Sunday, Mahomes was knocked out of the game in the third quarter after taking a hit to the head while falling to the ground. As Mahomes was getting up you could tell he was extremely dizzy and couldn’t stand up straight on his own.

Here the concussion of Mahomes hope he is fine #NFL pic.twitter.com/lpRhUiAWcI

Patrick Mahomes headed back to the blue tent after taking a hit. pic.twitter.com/NOKPe1tFOx

Mahomes was later taken to the locker room to be evaluated for a concussion.

QB Patrick Mahomes is being evaluated for a concussion.

Update: Mahomes was officially ruled out for the rest of the game.