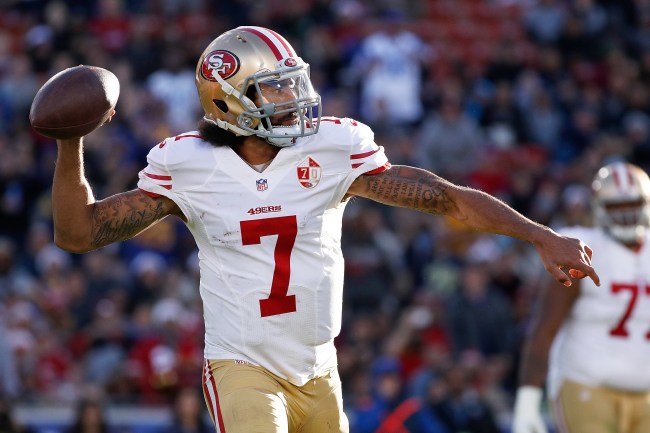 Last weekend Bill Polian’s developmental football league the AAF debuted to rave reviews and strong ratings. After the league’s inaugural week many asked if Colin Kaepernick could join in an effort to earn money and strengthen his case against the NFL. who he is currently suing for collusion.

Today the Associated Press is reporting that Kaepernick and the AAF held talks about joining the league and reportedly asked for $20 million to play in the developmental league.

A person with knowledge of the conversation tells The Associated Press that the new Alliance of American Football spoke with Colin Kaepernick during its development about joining the league.

But Kaepernick wanted $20 million or more to consider playing with the league that had its debut last weekend.

The person spoke on condition of anonymity Thursday because neither side has publicly acknowledged such talks.

Polian was asked about interest in signing Kaepernick and he did admit reaching out to the former NFL QB but he believes that Kaep isn’t interested in playing football right now.

A couple notes after talking to Bill Polian about AAF:
1) CEO Charlie Ebersol reached out to Colin Kaepernick about interest in playing in the league. "I don't know what transpired, but he's obviously not playing," Polian said. Polian personally spoke to Tim Tebow, who declined.

Considering that AAF players only make about $75k a year it seems like Kaep might be out of their budget.

AAF founder Bill Polian, an ESPN analyst, gave ESPN (imagine that!) the details on player salaries for the nascent league. Players will get three-year, non-guaranteed contracts worth $250,000, along with health insurance and an education stipend. https://t.co/15jFscs0vO