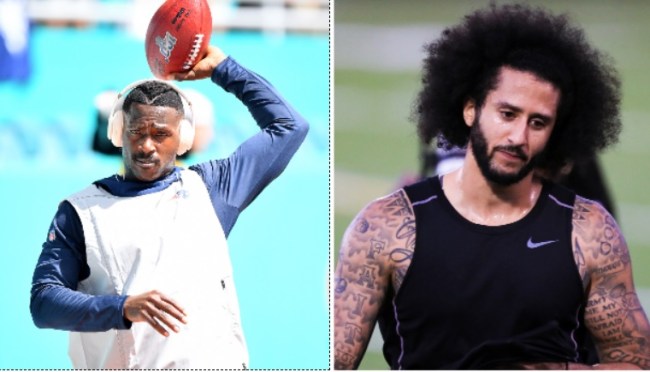 Despite Antonio Brown’s off-the-field behavior it seems like he’s going to get another shot at the NFL before Colin Kaepernick and Kaep’s supporters aren’t happy about it.

Early Friday morning, ESPN’s Adam Schefter reported that Brown was in New Orleans working out with the Saints right before the playoffs.

NFL has not concluded its investigation of Antonio Brown; uncertain when it will. Even after it wraps, Brown still could face additional discipline. Saints bringing in Brown for due diligence, not Sunday’s game vs. Panthers. But Saints take big WR swings; see Dez Bryant last year

And this is reason no 1 million why Kaepernick’s workout was a sham and a disgrace. Teams that are really interested do this 👇🏾

Also, AB will get endless chances because his behavior is seen as correctable. Kaep never got a chance because they can’t change the way he thinks. https://t.co/AgqdoaEAOm

Just remember that the very first excuse used against Kaepernick was that he would be a “distraction” to his team. https://t.co/cyLKMFmYZC

It’s amazing that no matter how much damage Antonio Brown has done to his credibility, teams will still consider offering him a job.

But not Colin Kaepernick. https://t.co/s3nuOnc88P

Antonio Brown – credibly accused twice of sexual assault and jettisoned from 3 different teams – has received a workout before Colin Kaepernick.

So AB can show his ass allllllllllll season and still get brought in for a visit. But not Kap tho. If yall still buying that "circus" excuse for not signing or even bringing in Kap for a workout when the NFL isn't even trying to sell it anymore you're a special kinda stupid.

Antonio Brown has had 14 major incidents in the past two years including multiple sexual assault accusations. And his behavior has most of us feeling like he has serious psychological issues.