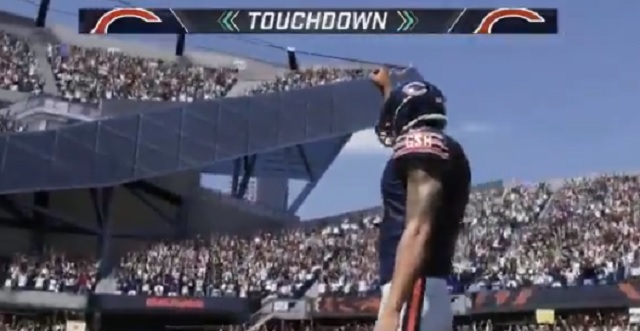 Colin Kaepernick is back in Madden and is returning with a new touchdown celebration.

On Tuesday afternoon, EA Sports announced they were bringing back Kaepernick as a free agent in the latest edition of the football video game series.

According to the Undefeated, Kaepernick collaborated with producers of the game and requested that he have an afro. Kaepernick also suggested to have a black power fist celebration whenever he scored a TD in the game.

EA Sports confirmed that Kaepernick requested that his player in the game wear an Afro — an update from his most recent head image in 2016 that portrayed him in Madden 17 with cornrows. Also, according to multiple sources, Kaepernick weighed in heavily on his avatar’s signature celebration — a Black Power fist — to reflect how he celebrated scoring plays the last time he took to the real-life football field during the 2016 NFL season.

Videos of Kaepernick doing the black power fist celebration in the game confirmed The Undefeated’s report.

When you score a touchdown with Colin Kaepernick in #Madden21 and choose "signature" celebration, Kap holds up the Black Power fist. pic.twitter.com/rclVIFjXze