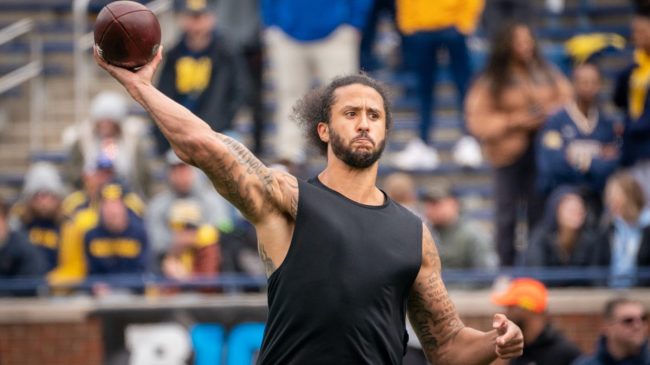 The Las Vegas Raiders bringing in Colin Kaepernick for an official workout is, obviously, a major story. Kaepernick is a polarizing figure, hasn’t played in the NFL in nearly six years, and has not been given any real interest since visiting the Seahawks in 2017.

One would imagine that the Raiders would have something, anything, to say about Kaepernick’s workout, but they’re refusing to share any details about how things went.

The Raiders knew that Kaepernick’s workout would bring a barrage of questions, but they’re not giving answers.

“We will only talk about the people that are on our team,” Raiders head coach Josh McDaniels explained.

“Dave (Ziegler) and his staff have worked out tons of guys this spring. We really don’t make comments about the evaluations that we made or what they looked like, what they didn’t look like, strengths and weaknesses, those kinds of thing. They are obviously kind of private for us as we look at things to try to make decisions to make the team better.”

While nobody knows if the 34-year-old Kaepernick has what it takes to make an NFL roster, the Raiders do have space in their QB room at the moment.

Las Vegas lost Derek Carr’s backup Marcus Mariota this offseason. While it’s a long shot, Kaepernick could slide into the QB2 spot for the Raiders. McDaniels is keeping his plans close to the vest, however.

“We brought in tons of people for workouts,” McDaniels said. “If there’s an opportunity to improve the team, we said it from Day 1 that we would look at every opportunity. He’s not the first player that we’ve looked at and not the last one.”

Time will tell if Kaepernick is given another opportunity with the Raiders.