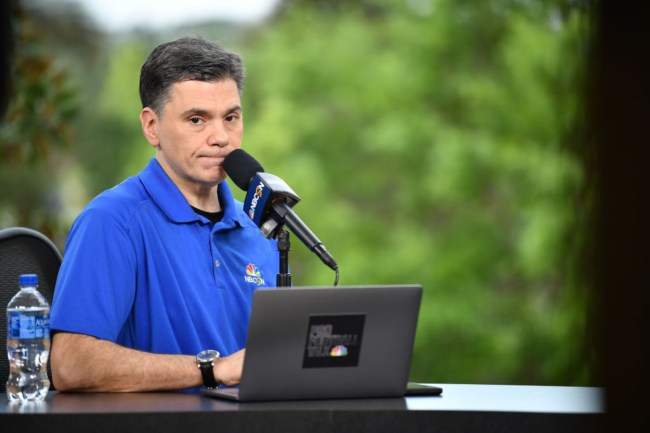 News broke on Wednesday that Colin Kaepernick is working out for the Las Vegas Raiders, which led Pro Football Talk’s Mike Florio to instantly lose every sense of reality and credibility he still had involving the NFL.

Florio has been one of the leaders of the ‘Kaepernick is better than many current NFL QBs’ club since Kaep last took a snap in the NFL nearly six years ago.

Two months ago though, Florio threw in the towel writing ‘the door is closed for Colin Kaepernick.’

“It’s not happening,” Florio wrote in March. “Why would anyone want a quarterback who hasn’t played in five years, especially in light of the inevitably hostile reaction from 30 percent of the fan base if he’s signed at this point?”

Now that the Raiders have put a call into Kaepernick, Florio is back leading the Kaep fan club. However, his tweet on Wednesday night about the situation was over the top, even for Florio.

Florio not only thinks that Kaepernick is better than every QB the Seattle Seahawks, Houston Texans, and Carolina Panthers currently employ, but he thinks he’s better than Tua Tagovailoa. We can’t forget about the Atlanta Falcons, too, Kaepernick would probably win that starting job too.

While it’s impossible to put all of Kaepernick’s protests, non-football activities, and him literally comparing NFL training camps to slavery aside, simply looking at the football facts here, Florio’s tweet is beyond comprehension.

Kaepernick has not stepped on an NFL field, or competed at any level for that matter, in over five years. The last time he was in the NFL, he was beaten out by Blaine Gabbert. Time didn’t stop when Kaepernick exited the league, either, he’ll turn 35-years-old in November.

For Florio’s brain to even come up with the thought that Kapernick is a better option than Tagovailao, and every QB on four other NFL rosters, is so beyond ludicrous, that it’s almost impressive.

Florio isn’t saying that Kaepernick could simply make the roster in Atlanta, Carolina, Miami, Seattle, and Houston, he thinks he’s better than every QB those teams have.

This statement is based on literally nothing. https://t.co/qQqvdUXQ8L

This man hasn’t played a snap in the nfl in 6 years. But he’s a better option for 3 teams? Okay lmao https://t.co/7OdLdzFyAn

at no time in history was this more fitting to a post pic.twitter.com/6P42Z0xGjF

Is pro football talk a news source or an opinion source? https://t.co/gH3LMuc4ld

I’m a fan of Kaep but this is just crazy talk https://t.co/lqruwZw8yr

This app is free comedy https://t.co/7uASBjACj1