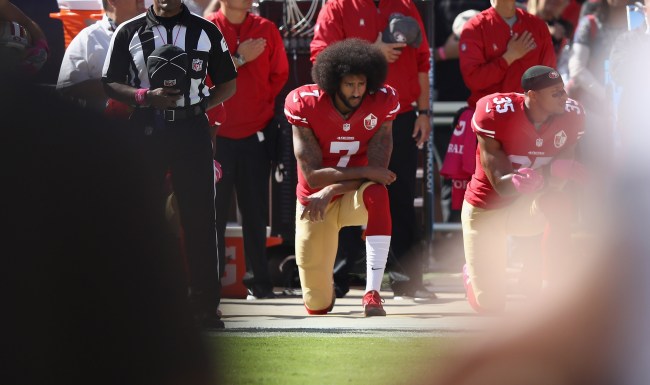 Former All-Pro linebacker Takeo Spikes strongly believes Colin Kaepernick should be honored in the Smithsonian Museum of American History in Washington, D.C. for his dedication to social justice issues.

Spikes, who played alongside Kaepernick in 2011 and 2012, told NBC Sports Bay Area’s Monte Poole he thinks Kaep deserves a statue for sacrificing his career to shed light on police brutality and racial inequalities.

“I think Colin Kaepernick, Monte I truly believe that he deserves some type of monument, a statue in the Smithsonian in D.C,”

The reason why I say this is because this man put everything on the line. … You hear the term ‘You can become a slave to the money.’ But Colin, could have easily done that. But I applaud him simply because he decided to take a stand. He decided to draw a line in the sand and say look, ‘I can make the money, I can live a carefree life for the most part and get paid handsomely and never say a thing because I’m not affected.’ But he took time to look back and really just see the big picture, the spectrum when we talk about the inequalities.

“He decided to not only call it out, but take a stand for it.”

Spikes isn’t the only former 49ers player to speak out in support of Kaepernick. Earlier this week, former Niners QB Alex Smith called Kaepernick “ahead of his time” for calling out for police reform before anybody else.

I think [Kaepernick] was ahead of his time, certainly trying to call out social injustice, especially around police reform. The country wasn’t ready. Nobody was ready for it. And he’s sitting there trying to tell everybody through a completely peaceful manner about some of the things going on in this country that had been going on for a long time, and to see the backlash that happened, it hurts. It hurts looking back at it.

“The country wasn’t ready for it, and he suffered the repercussions with his job. . . . I mean, he lost his livelihood. . . . [It was] tragic, sad, but obviously he was incredibly brave and certainly proud of him, to even know him and what he’s done, because fast forward a few years later and I think we all were like, ‘He obviously was trying to tell us something.’”