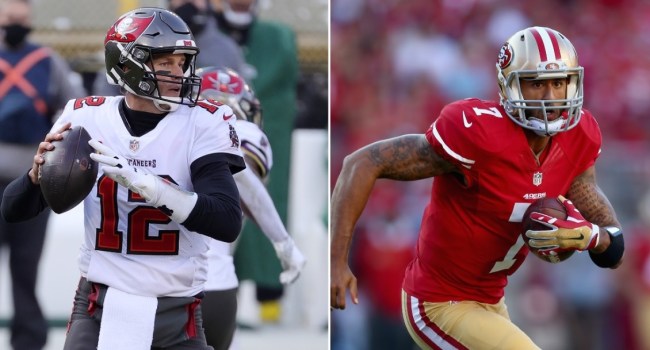 We’re about two weeks away from the Super Bowl and with the lack of football being played on the field, fans are passing the time by arguing about Tom Brady and Colin Kaepernick.

On Monday afternoon, a day after the Bucs clinched their Super Bowl berth, fans on Twitter got Kaepernick to trend on the social media app after someone questioned why people overlook Brady’s political opinions while crushing Kaep for his.

Funny how people can separate Tom Brady’s politics from his game, but struggle to do the same when it comes to Kaepernick.

Some football fans are pointing out that [Tom Brady's] politics, i.e., his friendship with Donald Trump, haven’t derailed his career in the way that Colin Kaepernick’s peaceful protest of police violence did, arguably leading to his exit from the NFL.

Some agreed with the fan’s take on Kaepernick/Brady situation and went on to add that no one talks about the $900k Brady took out in PPP loans for his TB12 company during the pandemic.

Tom Brady broke his phone because he was innocent in the Deflategate scandal, bought a million dollar boat after receiving a $960K PPP loan illicitly, and had his TB12 business on the Patriots payroll. Sports media never batted an eye, but Kaepernick and Vick enraged them pic.twitter.com/WwJS1J4jzu

Plus Colin Kaepernick didn't steal money from taxpayers with nearly a million in PPE loans. https://t.co/rcvr4tVuoV

Others disagreed with the Kaepernick/Brady take because they don’t believe Kaepernick was a good QB at all. People also argued that Kaepernick made his political views public while Brady hasn’t really been open about his politics while speaking to the media.

Short story: Tom Brady is good at football, Kaepernick is not. End of story

This is a dogshit take. Did y’all just forget how Kaepernick was playing before he was ostracized? If he was winning like Brady he would be in the league…. just like the people that were still kneeling yet were on teams. https://t.co/bsmCxKSztc

Kaepernick isn't on a team because he's terrible at football, it has nothing to do with his politics.

Mike Vick led a dog fighting ring on his property and went to prison but Philadelphia didn't care because he won football games.

If Colin Kaepernick could win, he'd have a job.

Aside for the many reasons this is a bad comparison, Kaepernick chooses to be a political activist. Brady just HAS political opinions. https://t.co/rutfyE78XP

Oh boy I'm sure there is some rational and educated discussion going on here. One QB is literally the GOAT, and the NFL always overlooks things when the talent is great enough (Josh Gordon, most notably). The other is Colin Kaepernick. pic.twitter.com/86YI4WrU80

It’s going to be a long two weeks of people arguing about stuff like this until the Super Bowl gets going, so it’ll probably be a good idea to stay clear from social media during that time if you’re a football fan.