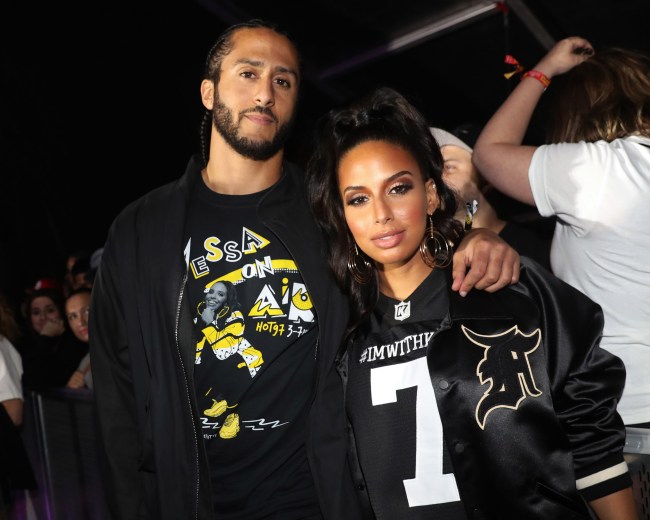 Yesterday afternoon the NFL announced that they had signed an entertainment and social justice partnership with Jay-Z’s Roc Nation.

.@NFL is partnering with Jay Z & @RocNation for entertainment and social justice endeavors.

Both Jay-Z and NFL commisioner Roger Goodell held a press conference at Roc Nation’s offices to discuss the partnership. During the presser Jay-Z and Goodell claimd they had conversations with Colin Kaepernick prior to forming the partnership.

Jay-Z and NFL commissioner Roger Goodell gathered with reporters for a press conference at Roc Nation’s New York offices on Wednesday to discuss their new entertainment and social-awareness partnership, which was revealed yesterday after news leaked.

Jay and Goodell said that they both have had conversations with Kaepernick, but declined to reveal any details about those conversations, or what his stance on the partnership may be.

Asked whether they plan to involve Kaepernick in the partnership, Jay said, “You’ll have to ask him, I’m not his boss. That’s for him to say.”

THIS is a lie. COLIN never spoke to Jay-Z and NFL ahead of that deal being done. They NEVER included him in any discussion 👉🏽 https://t.co/TWmoXS4JVJ pic.twitter.com/2bjSIEtnjQ

W O W. So this partnership deal started that long ago? I’m just at a loss for words.https://t.co/0t4CEMQqh7 pic.twitter.com/HetB8L1uHW

Kaepernick’s former teammate Eric Reid, who was also involved in a case against the NFL for collusion, also blasted Jay-Z on Twitter.

about people of color by forming numerous disingenuous partnerships to address social injustice while collectively blackballing Colin, the person who brought oppression and social injustice to the forefront of the NFL platform.

Interesting timing on the partnership with Jay-Z on the heels of Stephen Ross’ fundraiser for Donald Trump and the backlash his other companies are getting because of it. #PayAttentionFolks