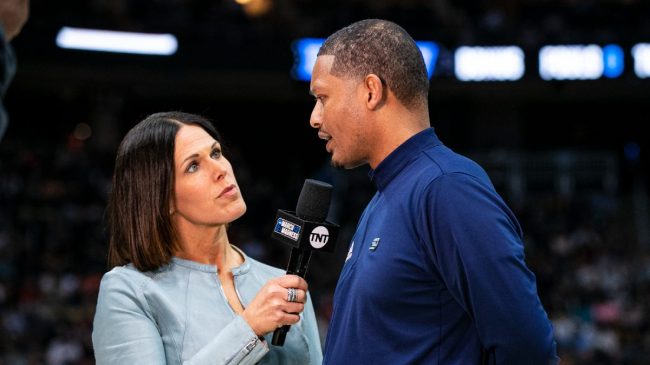 Martin was one of the best coaches in the school’s history after taking over possibly the worst Power Five program in the nation. He led the Gamecocks to their only Final Four appearance in the 2016-17 season, but unfortunately wasn’t able to capitalize on that NCAA Tournament run.

South Carolina landed just one invite to the Big Dance over Martin’s 10 seasons, and while that Final Four run was historic, the inconsistency wasn’t enough to secure his job.

With Martin out, the Gamecocks had opened up their first coaching search in a decade. On Wednesday, they officially ended that search.

Lamont Paris has been hired to be the next head coach in Columbia.

Five-year deal starting at $2.2 million and increases by $100K each year. @abc_columbia

He’s signed a five-year deal with a $2.2 million starting salary.

The Gamecocks had been linked to a few other head coaches throughout their search, including Sean Miller and Mike Boynton. But when the dust settled, it was Paris that landed the gig.

South Carolina gets a coach that’s fresh off a NCAA Tournament appearance with UT Chattanooga. The Mocs nearly took down Illinois in the first round but eventually fell 54-53. The Illini took their final lead on free throws with just 12 seconds remaining in the game.

Now, Paris gets his chance at the Power Five level. He’ll join an SEC that some have called the nation’s best conference from top to bottom.

With the news breaking, many on social media are giving immediate reactions. Take a look below.

Built it back. The right way. ✔️

Congrats and welcome @GamecockMBB new head coach Lamont Paris! You’re good to love Columbia, SC and most of all it’s people. Look forward to meeting, learning and working with you! @GamecocksOnline nation let’s wrap our arms around him! Go gamecocks!!!

Those close to Lamont Paris love him and couldn't have more positive things to say. Twitter users, who have never met or interacted with him, may want to sit this out, let him coach and see what happens.

Lamont Paris Street will be a thing one day near the Vista or Five Points. I'm calling it now. Dude is gonna be awesome! https://t.co/zJnN57OnId

#BREAKING: After taking the @GoMocsMBB to the NCAA tournament for the first time in 6 years, Head Coach Lamont Paris is leaving Chattanooga and heading to @GamecockMBB. https://t.co/ogTci04iYz

Congrats to my guy Lamont Paris on his new gig with @GamecockMBB . You got a good one!! https://t.co/O829aU2xSL

Another really interesting hire of a mid-major coach by an SEC team. Lamont Paris built a physically impressive team at Chattanooga. I think this is a good hire right now. https://t.co/7ghS6BPdom

Lamont Paris in the building. https://t.co/TUXChsu3R5