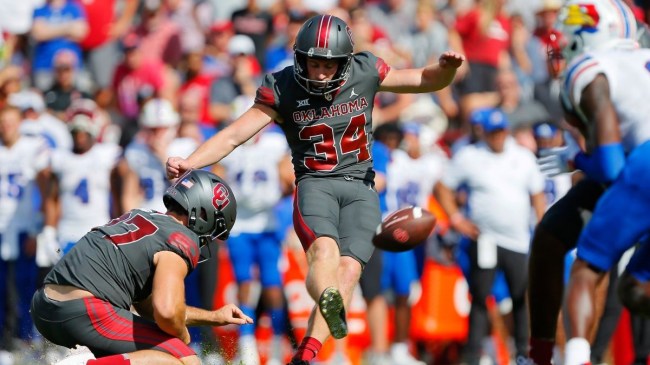 The life of a college kicker isn’t always a glamorous one. You work just as hard as the rest of your teammates in practice. You have immense pressure in games, and you get all the criticism when things go wrong but none of the praise when things go as planned.

But for one moment on Saturday, Oklahoma Sooners kicker Zack Schmit got his moment of glory against the Iowa State Cyclones.

The 2022 college football season has largely been a disaster for the Sooners and first-year head coach Brent Venables. Oklahoma started the year inside the top 10 in both the AP and USA Today Coaches Polls. But through seven games, they’re just 4-3 on the year and well outside the top 25. The struggles have led some Sooners fans to call for Venables’ head before he even completes a full season.

Schmit, however, has had a strong showing. The redshirt sophomore from Oklahoma City is 8-of-9 on the year on field goals and a perfect 32-of-32 on extra points.

But he probably never imagined he’d be waltzing into the end zone for a Sooners touchdown. However, that’s exactly what happened on Saturday and college football fans are loving it.

The Sooners stumbled early out of the gate. They fumbled on their first drive and then failed to capitalize on a short field before kicking a 34-yard field goal on the second.

On the third drive, Oklahoma marched 83 yards down to the Cyclones’ 2-yard line. After failing to punch it in on the first three downs, Venables send out his kick team for a 19-yard field goal attempt.

But he had something up his sleeve.

THE KICKER SCORED A TOUCHDOWN! THIS IS NOT A DRILL 🚨pic.twitter.com/oAeMjuEXE5

Rather than just kick the field goal, the Sooners’ holder pitched the ball to an onrushing Schmit. The Oklahoma offensive line then caved in the entire left side of the line and Schmit galloped into the end zone without being touched.

Fans across the country went nuts for the trickery.

This is a BAD ASS play https://t.co/FHIno1wxfv

Everybody loves a kicker tuddy!