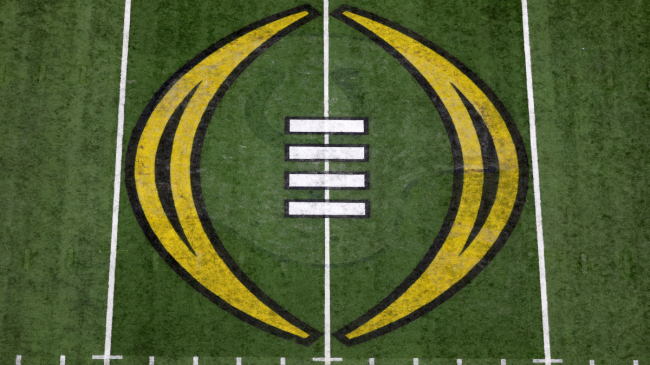 College football fans are not happy with the latest playoff rankings, and they’re now calling out the committee for SEC bias.

The most recent standings were released on Tuesday with four Southeastern Conference members finding a spot in the top eight. Two of those programs already have two losses on the year. No other two-loss teams reside in that top eight, although 8-2 Utah does round out the top 10.

And with that, here's a look at your full #CFBPlayoff Top 25 for games played through Saturday, November 12.

Given the respect from the voters, at least three of those SEC teams still have a legitimate shot at landing a spot in the playoff. With the conference’s dominance over the last decade or more, fans have grown tired of the narrative.

And with an albeit slim opportunity to see three teams from one league get into the postseason championship field, they’re not happy. The most egregious error in the eyes of many is having LSU ahead of Southern Cal. That Tigers team has caught fire of late, and they recently secured a meeting with Georgia in the SEC Championship Game.

But it seems that voters have forgotten about a season opening loss to Florida State, who sits at No. 19. LSU also has a blowout home loss against Tennessee on its resume. USC, on the other hand, has fallen just once. That was a one-point defeat on the road at No. 10 Utah.

Of course it's LSU at 6#SECBias #CFBPlayoff

But losses aren’t the only thing the committee looks at. Strength of schedule matters, and LSU’s wins far outweigh those of the Trojans. No. 23 Oregon State is the only team that USC has beaten that’s currently ranked in the top 25. The Tigers, meanwhile, have beaten Alabama and Ole Miss, both of whom sit in the top 15.

The Trojans will have a chance to strengthen their resume as they close the season with No. 18 Notre Dame and No. 16 UCLA, but it still might not be enough should LSU beat Georgia in the SEC title game. That would leave the Trojans potentially battling for a spot in the playoff with the likes of a SEC champion LSU, one-loss Tennessee, and one-loss UGA. Not to mention the Ohio State-Michigan winner and maybe an undefeated TCU.

We wrote previously about how an SEC-heavy College Football Playoff could speed up expansion. Should a one-loss USC team (or TCU, or Michigan, or Ohio State) get left out in favor of a two-loss SEC champion, there would undoubtedly be an uproar from other conferences.

The @CFBPlayoff committee not even hiding the SEC bias. Lose two games, one of them by 30, no matter still #6 in the nation ahead of multiple 1 loss teams. This is why we need the 16 team format. No more trash committee ensuring 1/2 the playoff spots to the SEC.

Paul Finebaum and Heather Dinich discussed how the possibility of a two-loss LSU getting a shot at a national title could impact college football. Dinich called an SEC champion Tiger team “the College Football Playoff committee’s biggest headache.”

.@CFBHeather thinks LSU winning the SEC would cause the CFP committee its biggest headache 👀

"[LSU] would be the first two-loss team in the College Football Playoff." pic.twitter.com/XyGfVR3sHL

They mention the fact that if LSU beats Georgia, who beat Tennessee, who beat LSU, it would be almost impossible to leave someone out. And you could still have the Big Ten champ, undefeated TCU, one-loss Clemson, and that one-loss USC team in the mix for four playoff spots.

For now, the committee might be hoping the Bulldogs take care of business in the SEC Championship, helping make the decision process a bit more clear-cut. If not, there could be a lot of angry college football fans come playoff time.