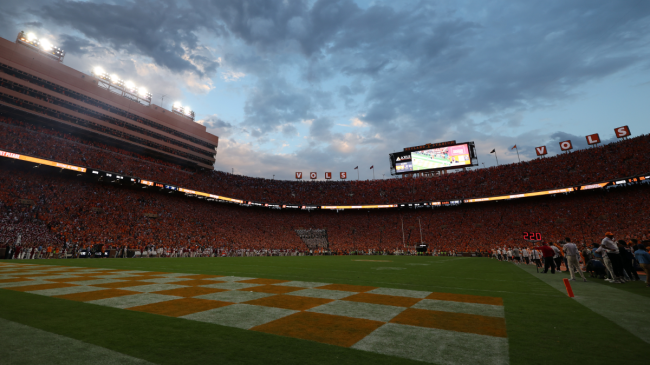 The Tennessee Volunteers pulled off one of the biggest upsets in college football this weekend, knocking off the Alabama Crimson Tide on Saturday. It was the first time in a decade and a half that the Vols landed a win in the series, and it now elevates the program into true College Football Playoff contention.

The win keeps the Vols on track to land their first SEC Championship appearance since 2007. They’ll still have to get through Georgia to represent the East, but after seeing last week’s performance, there’s nothing stopping them from taking down the Dawgs, too.

But the win was also impactful in a broader college football sense. The upset could set in motion an acceleration of postseason expansion.

There is now a legitimate chance for 3 SEC teams to make the CFP.

The scenario isn’t all that unfathomable, either.

Tennessee just took down Alabama, giving the Tide their first loss of the year. Should Bama win out and take down the Eastern representative in the SEC title game, there’s no way to keep them out of the CFP.

That leaves the Vols and Georgia, both of whom are undefeated but still have to play one another. Let’s say, for argument’s sake, that Georgia beats Tennessee, but the Vols win the rest of their games. Georgia also wins out before losing in the SEC title game.

That scenario gives you three one-loss SEC teams that all have a win over one another.

Many already get upset seeing two teams from the same league playing in the CFP. Fans would explode if three make it. But, then again, do we really think an undefeated TCU is better than either of those three teams?

Obviously, someone would get left out in this scenario. Someone always gets left out. But to this point, Tennessee has arguably the top resume in college football. Should they be punished if they drop a close one to the defending national champs on the road?

Ohio State and Michigan will have a case as the season progresses, but one will lose their regular season finale. Clemson and TCU remain undefeated but have seen close calls in conference play. USC might’ve just blown its playoff chances with a loss to Utah.

That could leave six teams competing for those final three spots. It could mean choosing the more deserving teams over conference affiliation, which would lead to an uproar among viewers.

CFP expansion is set for the 2026 season, though commissioners are pushing for a 2024 start date.

The sport has already agreed to expand to 12 teams by 2026, but it seems the folks in charge are hoping to speed that process up. If we see three teams from the same conference playing in the CFP, you can bet the cries for expansion will be even louder.

Getting 12 teams in would not only guarantee that conference champions get in, but it would keep room open for the teams that finished just on the outside. A Big XII champ Baylor wouldn’t get overlooked for SEC runner-up Georgia like we saw last year, but the expanded field would still allow the Bulldogs entry. And as we saw last season, conference championships don’t always equal national championships.

A three SEC team playoff might seem unlikely, but there’s certainly a path. We still have a lot of season to go, but even the possibility of this occurrence will have fans begging for CFP expansion to come quickly.