College Football Playoff Expansion Appears Certain, But What Could It Look Like And When Is it Coming? 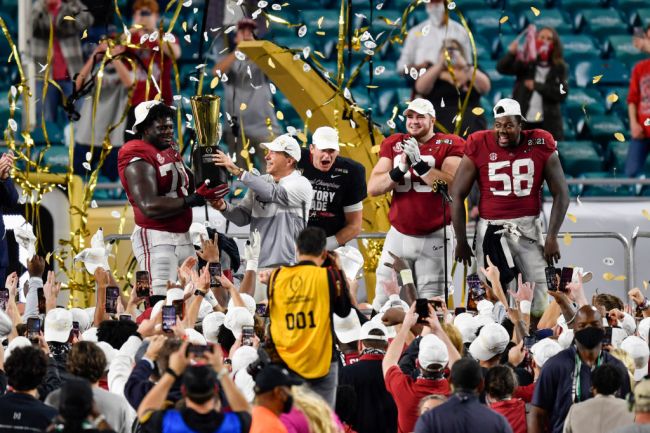 All signs point toward an expansion of the College Football Playoff. It is less a matter of if, rather than when and how. A larger field was to be expected at some point, so this isn’t breaking news by any means, but the CFP committee alluded to official growth in a statement on Friday.

The committee, comprised of the 10 FBS commissioners and Notre Dame athletic director Jack Swarbrick, met virtually on Thursday and Friday to discuss “some 63 possibilities for change.” Those possibilities included models of six, eight, 10, 12 and 16 team playoffs, each with a wide variety of difference scenarios. But, in true college football fashion, the committee kicked the can down the road.

The #CFPCommittee “continues to support and believe in the four-team playoff as it is currently constituted” after its annual spring meeting.

“There will not be a new format this season or next season,” Hancock said to ESPN. “The timetable is certainly an important detail, but it hasn’t been determined yet. It’s too soon to predict the timing, but even if the board decides to alter the format, it may well not occur until after the current agreement has expired, which isn’t until after the 2025 season.”

He further explained in his statement that the CFP is in its eight year of a 12-year agreement and that it’s important to consider the future of the sport.

Here’s the thing. Future expansion of The Playoff has always been fairly tightly tied to the next round of television contract negotiations. It was expected that once the current deal is up, the CFP will move beyond the four-team format. However, for Hancock and the committee to even consider such an idea (especially in the public light), means that it is virtually inevitable.

Thank goodness. While the field may end up shaking out to the best four teams in the end, CFP fatigue is real. The same six to 10 teams (if that) are considered legitimate contenders for The Playoff at the end of the season and a mix of Alabama, Clemson, Ohio State and Oklahoma have been a part of the field in each of the seven years. Expanding to at least six teams will allow certainty that the Pac-12 champion, which has been represented in only five of seven College Football Playoffs, will have a chance. It would also allow flexibility for a Group of Five team to have a shot.

Again, it may end up being a situation where the Tide, Tigers, Buckeyes and Sooners are the last four teams standing. But isn’t it better to know that another team didn’t deserve their spot? And who is possibly going to complain about more high-stakes, single-elimination football?

Just to get the picture, let’s look at who would have made up an eight-team (what many believe to be the most likely scenario) field over the last five years. These are the top-eight teaAms at the end of the regular season:

Yes, a lot of those fields look relatively the same. But they already do! Wouldn’t it be nice to get a few wild cards in the mix to shake things up? Maybe not. As someone who ultimately has zero control over the matter, I’ve decided to let things play out as they will. If they expand, great. If they don’t, has the four-team product led us astray thus far? I don’t think there is one National Champion in the last seven years that didn’t deserve the crown. Perhaps if it ain’t broke, don’t fix it.

No matter which side you’re on — for or against expansion — it looks like it’s coming. Not this year, and not next, but within the next 10 years. Buckle up.