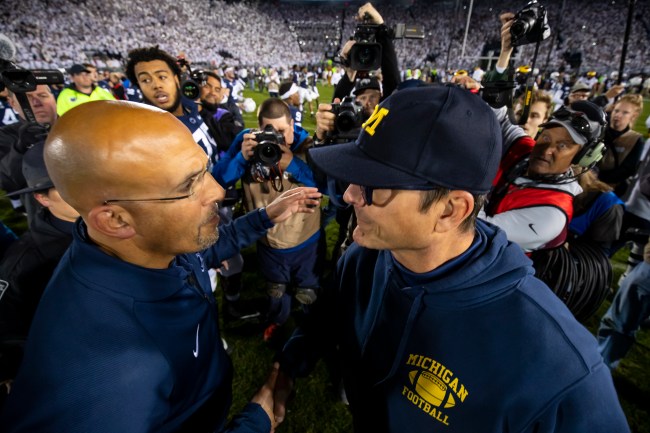 The first College Football Playoffs rankings will be released on Tuesday, meaning we’ll have an idea of which teams have the best path to reach this year’s National Championship Game. While teams like Ohio State, Alabama, LSU and Clemson are the perceived favorites out of the clubhouse, with a lot of college football left — including a showdown between Bama and LSU on Saturday — these first rankings should be taken with a grain of salt until the end of November hits and things are a little more clear.

While the College Football Playoff has, seemingly, given us a better method to determine a national champ for the past five seasons — and is clearly better than the previously method used, the BCS — not every college coach is convinced the system is ideal as is at the moment. In fact, of 62 head coaches polled in a recent ESPN story, 30 said they were in favor of the College Football Playoffs expanding, and 23 said they were against adding more teams; which is a pretty even split.

One of the college football coaches who is for expanding the playoff system from four to more is Oklahoma State’s Mike Gundy, who gives a clear reason why he thinks the field should expand from four to eight (or more).

“There should be eight. If you win your conference, there’s five of us, you win that, you’re in. Then the Central Floridas of the world, the Boises of the world, who are 12-0, or whoever is the highest-ranked team, they should be in. As it sits right now, there’s not ever a school at that level that’s going to get in the playoff. Not gonna happen. You had Central Florida go 12-0 twice. And they didn’t get in, so that proves it’s not gonna happen. If Central Florida were to get in, you take them and you play them against the No. 4 team. You don’t put them against the No. 1 team. Let’s just say if they come in as the 8, they play the 4. That way it will be a more exciting and competitive game for the country to watch on TV.”

And here’s a look at some of the coaches who are against expanding the College Football Playoffs, with Clemson’s Dabo Swinney explaining his reasoning.

Now, that’s pretty interesting stuff, and says a lot about the state of college football at the moment, doesn’t it? Considering the past four National Championship Games have included Alabama — with three of those coming against Clemson — some coaches may feel like there’s too much of a monopoly from big-time programs. In essence, style matters, which is something Ohio State head coach Ryan Day admits he’s aware of.

“Style points matter. That’s the world we live in, and those are the rules, so go play by them.”

As for some suggestions, Michigan head coach Jim Harbaugh fired off an in-depth scenario for expansion of the College Football Playoffs, offering up a bracket that shows his idea. It includes a 12-game regular season, and 11 teams in the playoff — starting with each Power 5 conference champion — with the No. 1 and 2 seeds getting a bye. It also includes using the old BCS system to rank teams 6-11 to determine the entire field. Take a look below at Harbaugh’s plan.

Also, Jim Harbaugh texted her his own playoff system proposal based on the 2018 season, a cameraphone photo of a printed-out bracket on his desk. pic.twitter.com/1qga3tJtXe

One other interesting fact from the ESPN story points out the college football head coaches who don’t even understand how the current selection process works for the College Football Playoffs, with 35 saying they do, a whopping 21 saying they don’t and 6 offering “other” replies. Here’s what Penn State’s James Franklin had to say about his lack of understanding about the current selection process.

Is that not concerning to college football fans and or the NCAA? If one-third of the head coaches polled by ESPN don’t know what criteria is necessary, how can they properly compete with the programs who do?

There’s a boatload of other info from the College Football Playoffs article on ESPN, so head on over to the site to see more replies and suggestions from some of the coaches interviewed. And, while there’s never going to be a perfect system, the ESPN story seems to offer little clarity as to what works best or is the preferred method to find a national champ in college football.