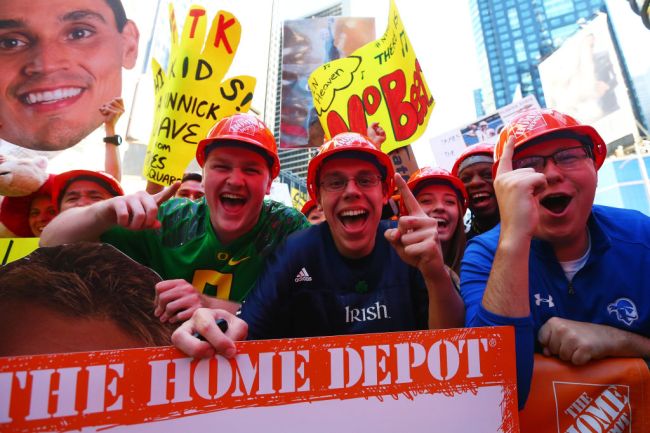 College football is all of the way back. There were a lot of expectations for this season and nobody was quite sure whether it would live up to the hype.

It has not only met the bar, but far exceeded the highest of hopes. FCS upsets are abound, top-ranked programs are getting mollywhopped and, perhaps most importantly, Lee Corso is back on the desk of College Gameday in front of thousands of rowdy fans.

Each Saturday morning, as we near closer to fall, there is nothing quite like waking up to the smell of football in the air and a slight dew on the ground. It’s finally “put your hand in the dirt” weather, and that means rolling out of bed, finding your remote buried in the couch, and turning on ESPN.

There’s just something about Corso, Kirk Herbstreit, Desmond Howard, David Pollack, and Reece Davis that makes all of the worries in the world feel weightless. College football is our religion and College Gameday is our morning mass.

One of the many staples of Gameday is the Home Depot sponsorship. And if you have ever watched the show, you know all about the hard hats.

If you’ve ever been to the show (I was there when Ole Miss beat Alabama in 2016 and Katy Perry stormed the field — it was sick), you know that the hard hats are hard to come by. There are only a certain amount of Home Depot hard hats and everyone wants one.

In this case, back for Week 1 on Sept. 4 from Atlanta, a group of fans gave their hard hats to a great cause. How high could they stack helmets on one man’s head?

This video of one fan trying to add an eighth helmet to a stack without having it fall is exhilarating. Your blood will be PUMPING the whole time.

It appears as though the sure-handed stacker’s name is Dustin. His friends begin to chant his name, but he wants none of it. He must focus.

And then he does it. Dustin completes the eight hard hat stack. The crowd goes nuts, I went nuts, everybody went nuts. What a feat!