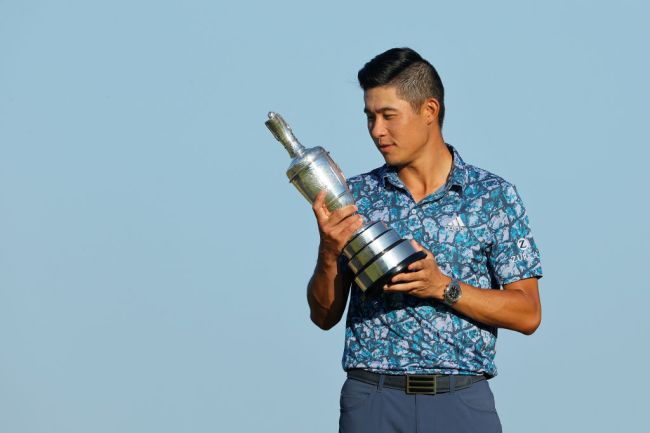 The word ‘masterpiece’ is defined as “a work of outstanding artistry, skill, or workmanship.” The definition needs to be changed to “Collin Morikawa’s final round at the 2021 Open Championship.”

Assassin. Killer. Surgeon. Those are more fitting titles than ‘golfer’ to describe Morikawa on Sunday. The 24-year-old put together a flawless round – one in which he very literally did not miss a shot – all while Jon Rahm, Jordan Spieth, and Louis Oosthuizen were breathing down his neck.

Collin Morikawa is a straight-up assassin. He put on a CLINIC today. A well-deserved Champion Golfer Of The Year. #TheOpen pic.twitter.com/WqrlVRM0vX

Starting the day in the role of chaser trailing a former Open champion in Oosthuizen in your very first Open appearance as a 24-year-old isn’t supposed to be as easy as Morikawa made it look. The same exact thing was said about his final round when he won in his debut PGA Championship in 2020. He came from behind that afternoon as well.

Related: Collin Morikawa Talks To Us About His PGA Championship Celebration, His Best Buddies On Tour, Where His Motivation Comes From And Much More

Morikawa had been there done that on the major stage, but this was The Open, the game’s oldest major championship. This was a links golf course with trouble searching for you each time you pulled the club back. When the trouble did find Morikawa on Sunday he simply did not care, got up and down from everywhere – with his most impressive par save coming on No. 10 – and poured in clutch putt after clutch putt.

His short game was what was most impressive on Sunday afternoon. Morikawa is the best iron player on the planet, and maybe the best since Tiger Woods, but you still have to have your short game show up to win and it certainly showed up this week. The up-and-down on No. 10 was the moment of the tournament, but the par save on No. 15 was unbelievably impressive as well, especially with Rahm and Spieth making a run just a couple of groups ahead.

Morikawa Made A Little Bit Of History

It’s tough to wrap your head around Morikawa’s win from a historical perspective, but Justin Ray shared some notes in an attempt to put things in perspective:

Morikawa has played in eight majors and won two of them by the age of 24. To put that into perspective, Tiger Woods didn’t win his second major until his 18th major appearance and 12th as a professional. It took both Jack Nicklaus and Gary Player 13 majors before they sealed the deal for a second time, while Spieth got major No. 2 in 10 starts.

It’s clear after this week that Royal St. George’s is one of the courses on The Open rota that is very weather dependant. It may have quite a few nasty bunkers, but its defense is the elements, and we got none during the entire week. It was 75 degrees without a cloud in the sky and the wind may have blown stronger than 15 mph twice.

The course also played unbelievably soft, specifically during the first three rounds. Most players were lucky to get 10 yards of roll after hitting the fairway. Call me a stereotypical American golf fan, but I expect fairways at The Open to be compared to race tracks. Instead, the fairways this week reacted like sticky zoysia grass.

Of course, Royal St. George’s and the R&A can’t control the weather. But, even if the weather was a factor this week, I think it’s safe to say RSG wouldn’t skyrocket up your rankings of the best Open courses.

It could be the fact that I watched a lot of golf before the sun was even up this week, but just about every hole at Royal St. George’s even seemed to look the same. There wasn’t that one hole that stuck out, a pin placement to remember, or even an aerial shot of the course that made you think ‘Man, this course is special.’ Bland is a good word to describe Royal St. George’s.