Collin Morikawa Talks To Us About His PGA Championship Celebration, His Best Buddies On Tour, Where His Motivation Comes From And Much More 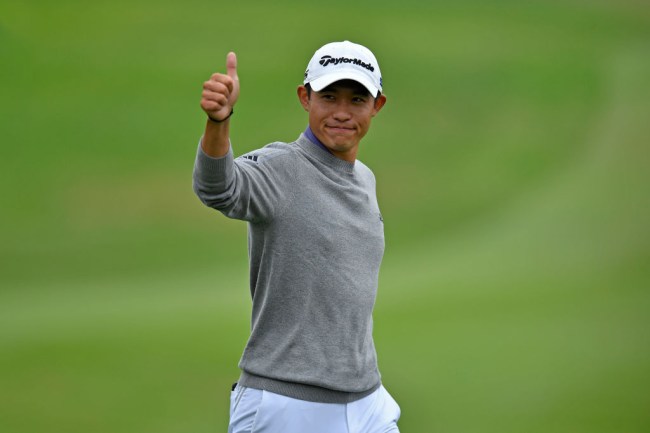 Life is good for Collin Morikawa. At just 23-years-old he’s already earned three wins, which includes the PGA Championship in what was only the second major start of his career, and has already propelled himself to being the No. 5 player in the world. That’s not too bad of a resume for a player that made his first professional start only 14 months ago.

That’s the scary thing here, Morikawa is just getting started.

We got a chance to talk with the man himself about just how good life is these days. We also spoke about his outlook on the FedEx Cup Playoffs, that awkward exchange between him and his girlfriend after winning the PGA, what he’s learned since turning professional and who his best buddies are out on Tour.

BroBible: You earned the No. 2 spot in the Wyndham Rewards earning a smooth $1.5 million bonus and enter the FedEx Cup Playoffs in that No. 2 spot as well heading into The Northern Trust. It has to feel pretty great earning those spots and that bonus as an ultimate indicator of just how consistent you’ve been playing this season.

Collin Morikawa: Yeah, it’s really nice, obviously, the goal this year is to make it to the Tour Championship, but not just make it, but to have a chance towards the end and we put ourselves in a very good position. I was flying on Sunday on the plane and thankfully we had Wi-Fi and I was getting a bunch of texts out of nowhere once we’ve finished up and they’re saying, you know, ‘what a nice little bonus to get by not doing anything’, but it wasn’t by not doing anything. There’s a lot of work, a lot of learning throughout the past year to get to this.

BB: You hoisted the Wanamaker Trophy this year and have two other PGA Tour wins in your pocket as well and you’ve done so in rapid fashion. What’s the biggest thing you’ve learned through all of this just over a year since turning pro?

CM: Yeah, you know, something I told myself last summer was to never get ahead of myself. I had no status. I had nothing guaranteed. I only had starts and I had these opportunities. How much can I learn from them? But I couldn’t start looking ahead. You know, I didn’t want myself to start looking at all the points and look at what I needed to get to earn enough status or to do this or that.

I hit a wall. You look at the Charles Schwab [Challenge] and I don’t extend the playoff by missing a putt from three or four feet, I got ahead of myself.

I had to hit really good shots and I had to have things go my way with Justin Thomas [during Workday Charity Open playoff]. That obviously helped at the PGA Championship. I was very focused. I was super dialed in throughout the entire round pretty much.  That helped a lot coming down the stretch, especially after I made the eagle putt. On 17 and 18, the tournament wasn’t over. I couldn’t let my guard down and just get relaxed thinking about what could happen if I won the PGA. I had to get that last putt in and thankfully it was a nice short one that I gave my full attention to.

BB: You’re a major champion, currently the No. 5 player in the world, recently earned a $1.5 million bonus and just 23-years-old. You’re just getting started, and have checked off a lot of boxes most players never get to check off. Just how great is life right now?

CM: Someone asked me last week, you know, what is the satisfaction you get out of this and what do you look forward to and all this stuff? And for me, yes, there’s a lot of happiness. There’s a lot of celebratory things that can happen from winning a major, but there’s always that little thing in the back of my mind that I’m just not satisfied with because I just want to keep going. I don’t want it to stop. I want to keep getting better. I want to keep moving up.

Whether we finish first or whether we get to that first position in the world, whatever it is, I know for me it’s not just going to end there because I know guys are going to want to take that spot and guys are always going to keep getting better, and that’s just me being me. I want to just keep pushing the boundaries, keep getting better, keep doing better things.

BB: I have to ask you about the awkward moment after you won the PGA. You walk off the 72nd green, your girlfriend is there to congratulate you, but it was pretty clear somebody basically told you that you could only go with the high-five. Probably not what you had in mind.

I’m always going to remember that and yeah, the weird finish, but I think we’re going to remember all of these past few months, and who knows when this is going to stop and when we’re going to whatever the new normal is going to be. I think when we look back, and I know I’ve been able to look back and kind of look at what the past few months have been is how fortunate we are, how lucky we are as a sport. What the PGA Tour has done for us, we’ve been super lucky because of the position we’re in to be able to come back and bring sports back live.

BB: What did the celebration look like after the cameras shut off and you got to reflect on the PGA? You took the following week off, get into anything special during the short break?

CM: The celebrations haven’t gotten too crazy just yet, I was packed with media and I just wanted to relax. Just went to dinner with my caddie and a few other people, the dinners will ramp up, especially being in Las Vegas and living out there. Getting people and a few friends to go to Las Vegas won’t be too hard. So that’ll happen.

I didn’t touch a club until Thursday last week, but for me during an off week, it’s just go play nine holes, play with my girlfriend, practice what I need to get everything dialed in, and just get mentally and physically ready. With this three-week stretch coming up it’s a lot of taking things easy, resting, eating some really good food.

BB: Who are your best buddies out on Tour? Obviously right now with the whole social distancing thing, it’s probably tough to hang with the guys I’m sure, but I have to assume there are some group texts and practice round preferences for you.

CM: Yeah, I kind of just ride it solo and the practice rounds. I like to play a lot and I’ll have some matches with the young guys, with Scottie Scheffler, Cameron Champ, Matthew Wolff. Viktor Hovland likes to go out in the afternoons, and I don’t know why, he’s crazy.

I feel very close to the young guys, it’s because I’ve grown up with them and you look at these guys, you look at guys, Top 25, Top 50, whatever. It’s been fun to get to know these guys. Will I go and play some holes with Tiger or whoever it is, if I see them out there, of course. These guys have been out of this world kind and nice and respectful to me coming out on Tour and getting these sponsor exemptions and helping out and asking and answering questions when I need to.

I wouldn’t say I’m super close to any one of them because I kind of just run by myself and kind of do my own thing, but these guys have been so kind and I think we’re all really good friends now.