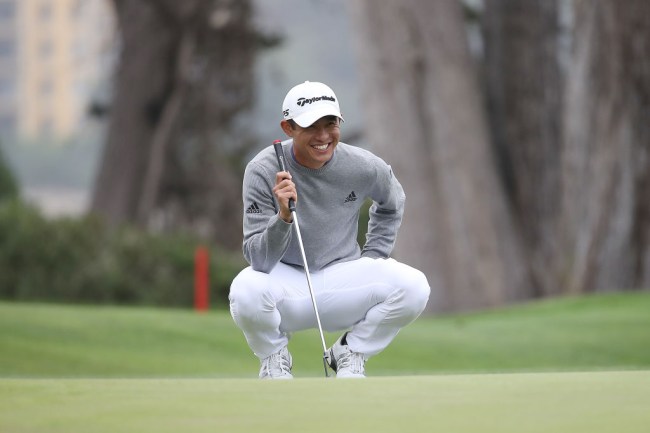 Collin Morikawa put on a show during the final round of the PGA Championship. While he began the day just two shots off the lead, it was still just his second start in a major in his young professional career. With Dustin Johnson leading the tournament and the likes of Brooks Koepka, Bryson DeChambeau, and Justin Rose chasing as well, plenty of folks were overlooking Morikawa despite him being one of the most consistent players this year and a proven winner on Tour.

Things quickly turned his way after he chipped in on the Par 4 14th to take the solo lead at 11-under. While that shot gave him momentum heading into the final stretch, his tee shot on the short Par 4 16th is what sealed the deal. It was unquestionably one of the greatest shots in PGA Championship history and was the ultimate ‘watch out world’ moment for the 23-year-old.

Pulling driver on a risk-reward Par 4 down the stretch at a major is a big-time move and knocking it to seven-feet and making the eagle putt is an incredible way to call game.

Morikawa joined The Pat McAfee Show on Thursday and spoke about that moment leading up to the drive and what was going on through his mind. He described it as being in the zone, similar to what we see from Steph Curry when he pulls up from almost half-court and drains a three-pointer.

Morikawa had all the confidence in the world, all he needed was a good bounce, and he got it.

Could @collin_morikawa feel he was in the zone on hole 16 at the @PGAChampionship?

"When @StephenCurry30 pulls up from half court, he doesn't have to look because he knows it's good, that's the type of feeling I had" #PatMcAfeeShowLIVE pic.twitter.com/rMLXsTKfhN

We’ve all been ‘in the zone’ before, only those moments come for us regular folks in our driveway shooting hoops or playing for incredibly small amounts of money on the golf course, definitely not on one of golf’s grandest stages.