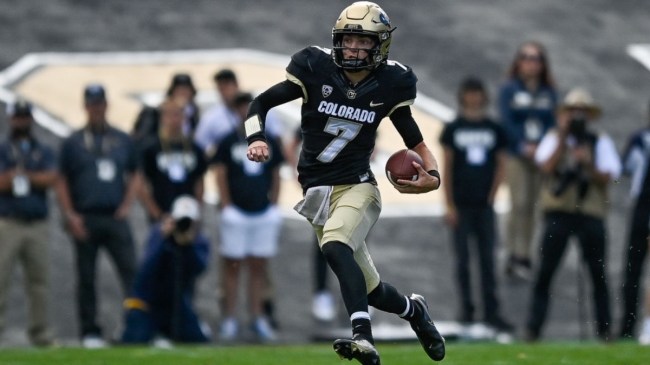 To the surprise of absolutely nobody, it didn’t take Deion Sanders very long to make a big impression at Colorado after signing on to be the new head coach of the Buffaloes.

In his first meeting with his new team, Coach Prime told Colorado’s players to get ready to jump in the transfer portal because he’s bringing in guys to replace them.

Deion Sanders first team meeting at Colorado is must watch.

Favorite quote: “We got a few positions already taken care of because I’m bringing my luggage with me… And it’s Louis”

We got a few positions already taken care of, because I’m bringing my luggage with me — and it’s Louis [Vuitton]. Okay, it ain’t gonna be no more of the mess that these wonderful fans, the student body, and some of your parents have put up with … for probably two decades now. I’m comin’ and when I get here it’s gonna be changed. So I wan’t y’all to get ready, to go ahead and jump in that portal, and do whatever you’re gonna get, because the more of you jump in, the more room we make, because we’re bringing in kids who are smart, say that, tough.

It didn’t take long for one of those players to listen. Today, On 3’s Matt Zenitz reported that Colorado quarterback Owen McCown, the son of former NFL quarterback Josh McCown, has entered the transfer portal.

The move doesn’t come as a huge surprise after Sanders announced that his son, Shedeur Sanders, would be the new quarterback at Colorado.

McCown didn’t make a huge impact in his freshman season for the Buffaloes, but did take quite a few snaps early in the season. He appeared in 4 games for Colorado, throwing for 600 yards and a pair of touchdowns.

he was able to redshirt this season because he only played in 4 games, which means he will have 4 years of eligibility where he chooses to transfer.