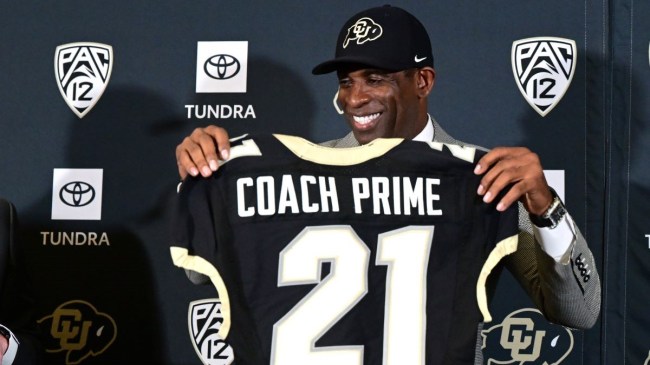 It’s officially Prime Time and Colorado University and it took less than 24 hours for things to become must-watch TV. The Buffaloes officially announced Deion Sanders as the new head coach of their football program on Sunday. During the introductory press conference, Colorado Athletic Director Rick George made an absolutely stunning admission about Sanders’ contract.

But that was just the start of the show.

When Sanders spoke with his Jackson State players on Saturday to tell them he was leaving, he also told them not to immediately enter the transfer portal. He then said he would speak to each player individually about their future.

Apparently, that’s a much different approach than the one he’s taking with players at Colorado.

Prior to even meeting with Colorado players, Sanders announced that his son, Shedeur, will be the team’s quarterback in 2023. If that didn’t rub Buffs players the wrong way, the next part sure did.

Sanders met with Colorado players for the first time on Sunday night. Typically, a coach takes this time to introduce himself and make sure he’s well-liked by his new players.

Coach Prime didn’t nothing of the sort. Instead, Sanders pulled the equivalent of dropping a stick of dynamite into a lake and seeing what floats to the top. He told the Colorado players that they should get read to enter the transfer portal, because he’s bringing new players with him.

“We got a few positions already taken care of, because I’m bringing my luggage with me — and it’s Louis [Vuitton]. Okay, it ain’t gonna be no more of the mess that these wonderful fans, the student body, and some of your parents have put up with … for probably two decades now. I’m comin’ and when I get here it’s gonna be changed. So I wan’t y’all to get ready, to go ahead and jump in that portal, and do whatever you’re gonna get, because the more of you jump in, the more room we make, because we’re bringing in kids who are smart, say that, tough.”

Now, Colorado went 1-11 this season after a 4-8 record the year prior. So it’s fair to say the roster could probably use an influx of talent. But telling an entire 85-plus-man team that they can leave seems like a bold strategy.

We’ll see how that works out for him.