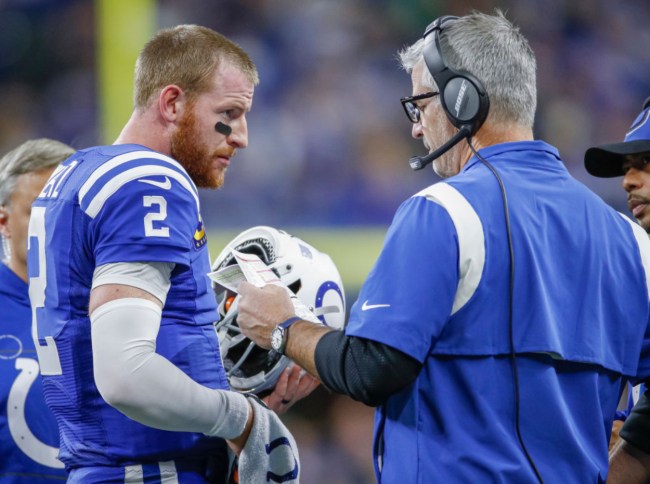 Carson Wentz is no longer an Indianapolis Colt and based on head coach Frank Reich’s comments about the QB he may not be completely happy about that.

“I really believe he can be a top-10 quarterback,” Reich explained, according to ESPN. “That’s not just a given. That has to be earned and proven, so we’re all hoping that happens for him.”

The Colts’ head coach went on to explain that the decision to trade Wentz to Washington was “unanimous,” it’s clear that Reich has a soft spot for his former QB.

Saying Wentz can be a Top 10 QB in the NFL is one thing, but Reich wasn’t done showering Wentz with compliments there.

“I love the guy, I really do. And I think he’s a really good quarterback,” Reich said. “He’s going to play really well for the Commanders and I’m excited to see that. … We as an organization thought highly of Carson in a lot of ways.

“Obviously, we traded for him. But then secondly, sometimes you can’t explain everything. You want to, but you just have to make a move that you think is right.”

It’s interesting to see Reich talk Wentz so much after spending just one season with him in Indy, but it’s worth remembering he was also Wentz’s OC for two seasons in Philadelphia.

Nevertheless, Wentz is gone and Matt Ryan is already in the fold to take over for him in Indianapolis.