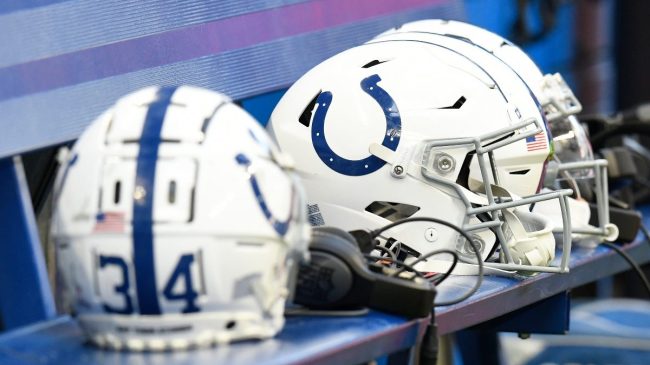 So the Indianapolis Colts have been a bit on the dramatic side of things lately. With Jeff Saturday replacing Frank Reich as head coach, the franchise remains in the news cycle. However, the team shockingly announced Matt Ryan as the starting quarterback for Saturday’s game and fans are now suspect of Jim Irsay’s decisions.

Fans Are Suspect Of Jim Irsay’s Decisions For Colts

According to Jonathan Jones, “Jim Irsay lets Saturday play with [Matt] Ryan when he wouldn’t with Frank Reich.” It’s an odd situation, as all week leading up to the matchup against the Las Vegas Raiders, the Colt led everyone to believe Sam Ehlinger would remain in the starting lineup.

“So [Jim Irsay] lets Saturday play with [Matt] Ryan when he wouldn’t with Frank Reich.”@jjones9 gives the scoop on feelings around the league regarding Jeff Saturday and the Colts 👀 pic.twitter.com/jXpjtzibqo

As you can imagine, Ryan playing as the starting quarterback caught the attention of football fans. They believe something is a little fishy, but overall, nobody is understanding the thought process in Indianapolis.

Jim Irsay was the one who pushed hard for Matt Ryan being benched.

Watch the Colts this game. pic.twitter.com/DzPcsOaBSS

Makes sense, but it’s just an odd way of going about it.

Let’s let today’s decision with Matt Ryan officially put to bed the notion that the Colts were trying to tank the season.

RIP to those thoughts.

This was *always* about Jim Irsay searching for whatever could spark his football team to winning games.

Colts fans are just seeing the current quarterbacks under center.

Why?! We need to be in full tank mode to get Young or Stroud!

We’ll see how it all plays out, as Jeff Saturday is going to have the rest of this season to prove himself as a head coach. Even so, it’s hard to ignore how involved Jim Irsay is with the team right now. Maybe he fixes the issues, but it could completely backfire as well.