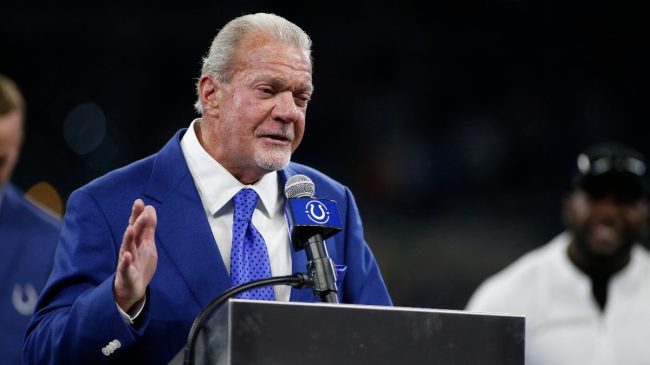 We’re all well aware of the Indianapolis Colts’ decision to bench Matt Ryan. He had way too many turnovers and things weren’t looking great after getting swept by the Tennessee Titans. Now, it sounds like owner Jim Irsay wants everyone to know the role he played in the team making a change at quarterback.

According to Chris Mortensen, Irsay claims he “empowered head coach Frank Reich to make the change at quarterback from veteran Matt Ryan to Sam Ehlinger.” That’s a bit different from what the original storylines read, as it was believed the Colts benched Ryan due to his shoulder injury.

Colts owner @JimIrsay said early this morning that he empowered HC Frank Reich to make the change at QB from veteran Matt Ryan to Sam Ehlinger, a 6th rd pick in 2021, and was "excited" and that he, Reich and GM Chris Ballard were in "lockstep" on the move.

Additionally, “empowered” is an interesting choice of words from Jim Irsay. Especially considering he admits both Frank Reich and Chris Ballard were “in lockstep in the move.” Regardless, the Colts’ owner understands the situation as he praises Matt Ryan.

Irsay praised Ryan as a “true pro and leader” but “Matt understands you can’t have (12 turnovers)… the competitor in him wants to play.”
“Our line let him down. He’s injured..he’s shellshocked.”
Ehlinger talks heated up after Denver game but “you don’t fire a QB after a W.”

Although the Colts are going through some major changes at quarterback, Jim Irsay can’t help but be optimistic about the future. He didn’t hold back in hyping up Sam Ehlinger.

Irsay: Colts’ 2nd loss to division rival Tennessee made move inevitable but a 3-3-1 overall record means “we are not giving up on the season.”
“Frank is really excited about Sam. He’s got the it factor and Frank saw 5 or 6 throws during the Titans practice week that were…wow.”

We’ll see how it plays out for Indianapolis. Many believe their season is done for, however, the Colts sit 3-3-1 on the year. Look for this team to try their best to compete as they’re still in the running for the playoffs.